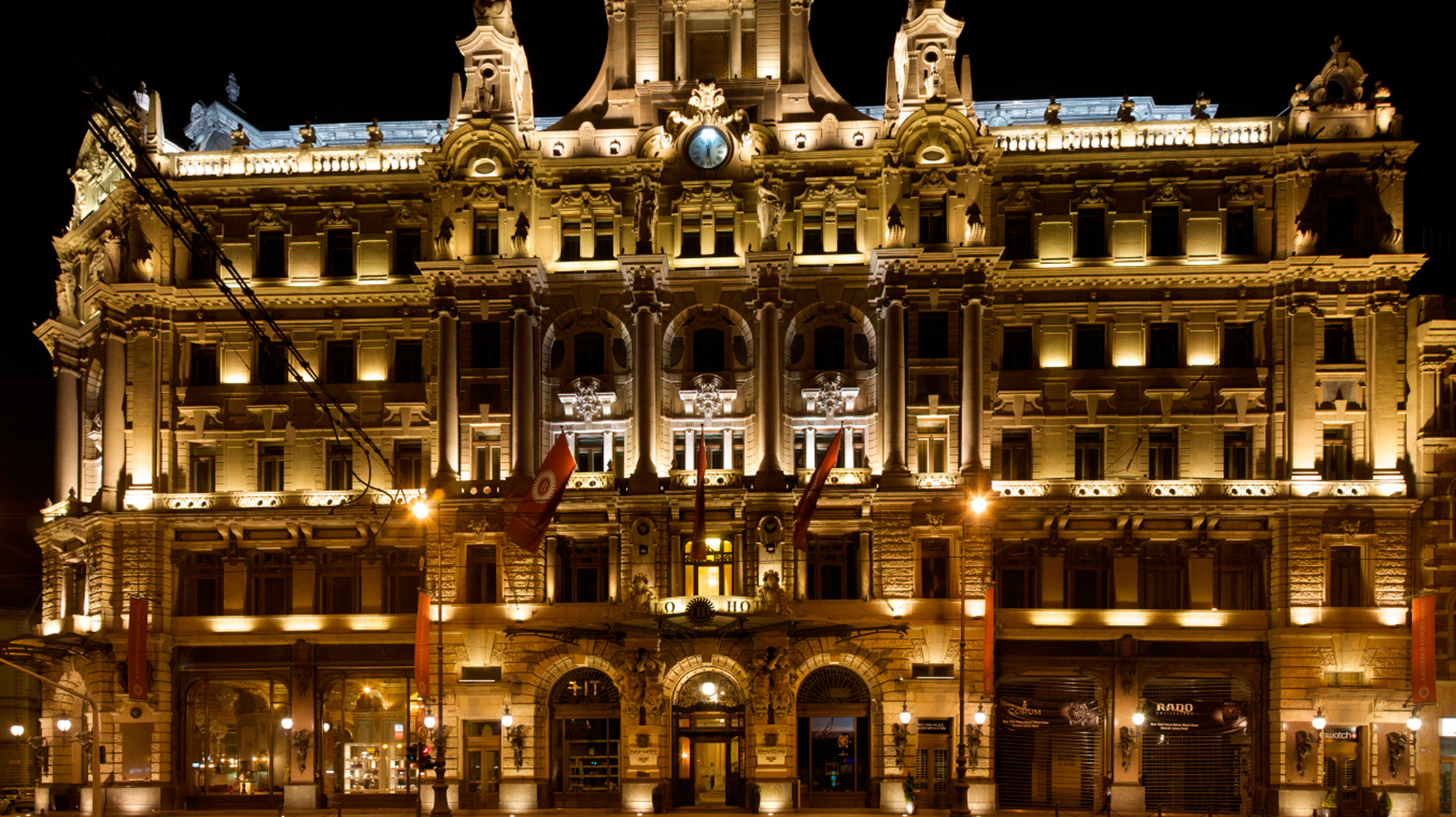 Blessed with a character only the passage of time can bestow, heritage hotels are invariably bastions of superlative taste. Each has its individual charms, from the grande dames of Europe to the peach-colored palaces of India, from the boozy glamour of New Orleans to the Renaissance allure of Tuscany’s villas. Here we delve into what makes the story of each of these properties quite so unique.

Built by the New York Life Insurance Company in the late 19th century, the café in the bowels of The Boscolo Hotel, The New York Café, was for decades the single most important hub of Hungarian literature. Having undergone a huge refurbishment in 2006, the place hasn’t aged a jot either. A four-storey palace littered with statues, paintings and frescoes, the hotel was nationalized during the Communist period but while politics comes and goes, Boscolo’s beauty has endured. Guests can amuse themselves by watching passersby fail to make progress beyond the devilish bronze fauns outside, instead being drawn in to see the hotel’s countless Belle Époque charms.

Latticed screens, ornate filigree work and the palace’s giant scale mark Laxmi Niwas Palace out as a place of no ordinary beauty. And it’s no less impressive on the inside, where carved four-poster beds, antique furniture, and marble are framed by grand peach colored sandstone. Built in 1904, the palace was formerly the residence of Maharajah Ganga Singh, the ruler of Bikaner, and quickly attracted flights of European royalty. A curious mix of architectural forms, it may have been the inspiration behind Lutyens’ and Baker’s own inimitable styles. 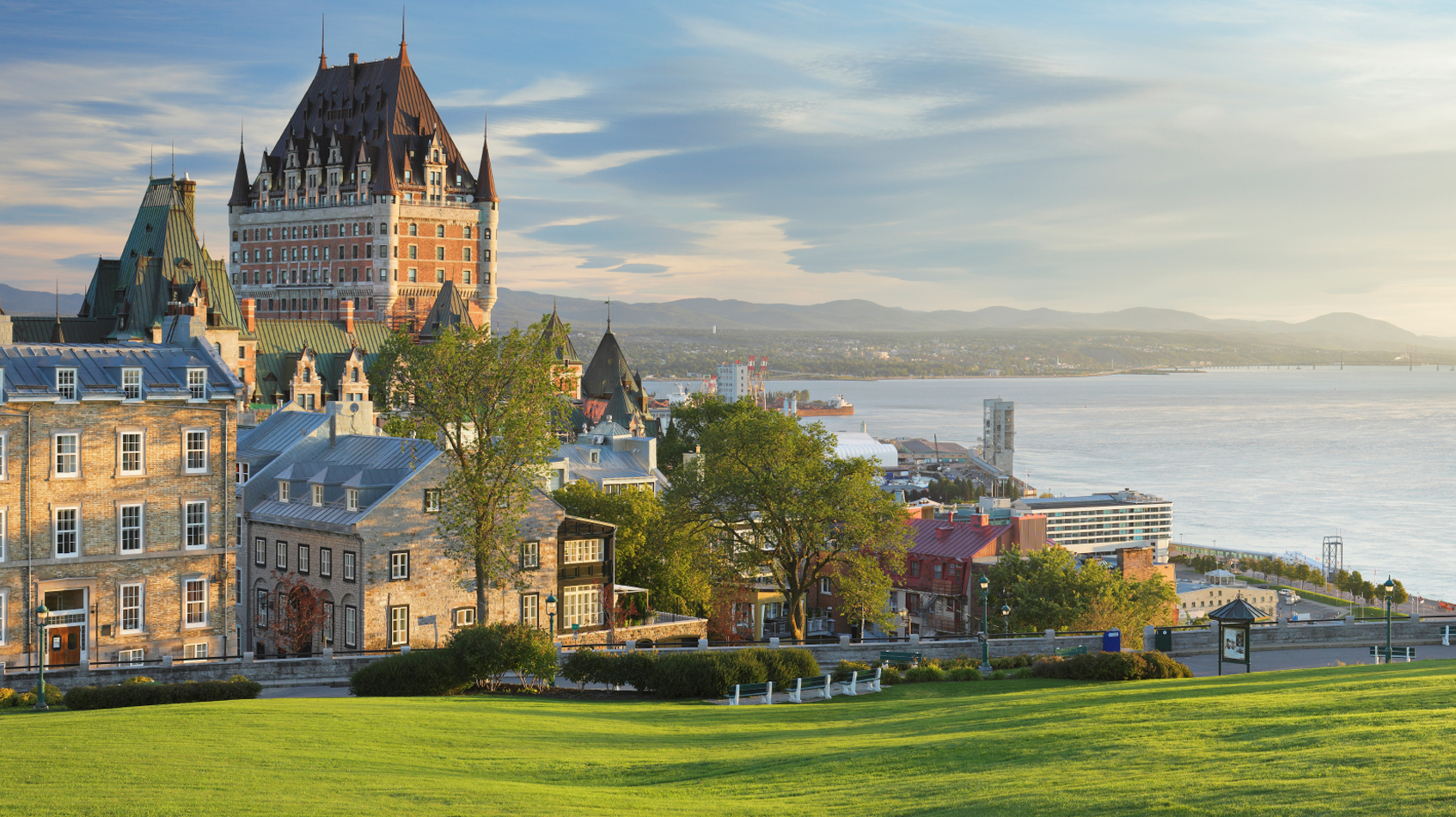 Standing on the site of Château Haldimand, the residence of the British governors of Lower Canada and Quebec, Frontenac is one of the most photographed hotels in the world. Snug inside the walls of the fortified Old Town, it was here that Churchill and Roosevelt discussed World War II strategy during the conflict, and where, after the war, Alfred Hitchcock filmed I Confess. Designated a UNESCO World Heritage Site, Frontenac’s party trick is to bring the Old World to the New without muddling the qualities of either.

Built at the entrance of Versailles Park in the early 20th century, Trianon Palace Hotel quickly attracted some of the biggest names of its time. The Italian poet and politician Gabriele d’Annunzio held banquets here before WWI, it served as the HQ of Allied commanders during the conflict, and The Great Room played host to one of the most important events in European history: the preparation of the Treaty of Versailles. Later, during German occupation, Goering and Hitler visited and when the fortunes of war reversed themselves, Allied leaders including General Eisenhower stayed for several months. A Rococo extravagance located only 40 minutes from Paris, with manicured lawns and great views of the Palace of Versailles, it’s not hard to see why the place has held history in its thrall. 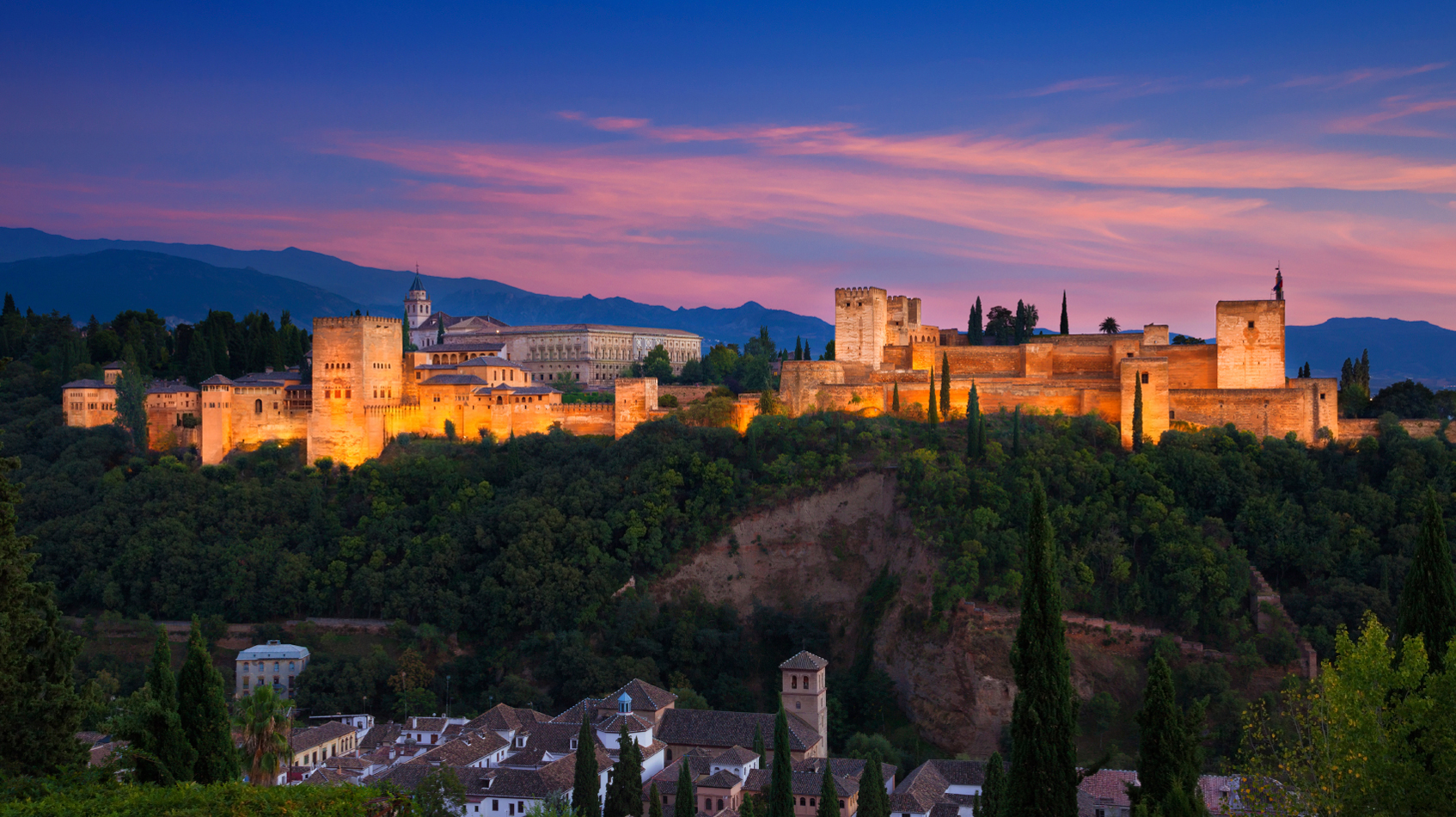 Sitting on La Sabika hill, overlooking the city of Granada and flanked by the Sierra Nevada Mountains, even from a distance Alhambra Palace remains a potent symbol of Andalusia’s Islamic past. Its original Arabic name – qa’lat al-Hamra – means Red Castle and is a reference to the distinctive clay bricks that form the outer walls. Once inside, the expansive complex of palaces, fortifications, roads and stunning, landscaped gardens – all created in the evocative Medieval Moorish architectural style – exercises a unique power over visitors, transporting them back through the centuries.

Opened as “The Grunewald” in 1893, the hotel was later named after Roosevelt as a hat-tip to the president for building the Panama Canal, a project that brought huge amounts of business to New Orleans. Famous from its earliest days as a music hub, it has a good claim to possessing one of America’s first nightclubs, The Cave – a haven of Dixieland jazz. As such, the hotel has seen a series of famous faces from Louis Armstrong to Ray Charles pass through its revolving doors, and, having undergone a $145 million restoration, it now blends historic grandeur with contemporary class. 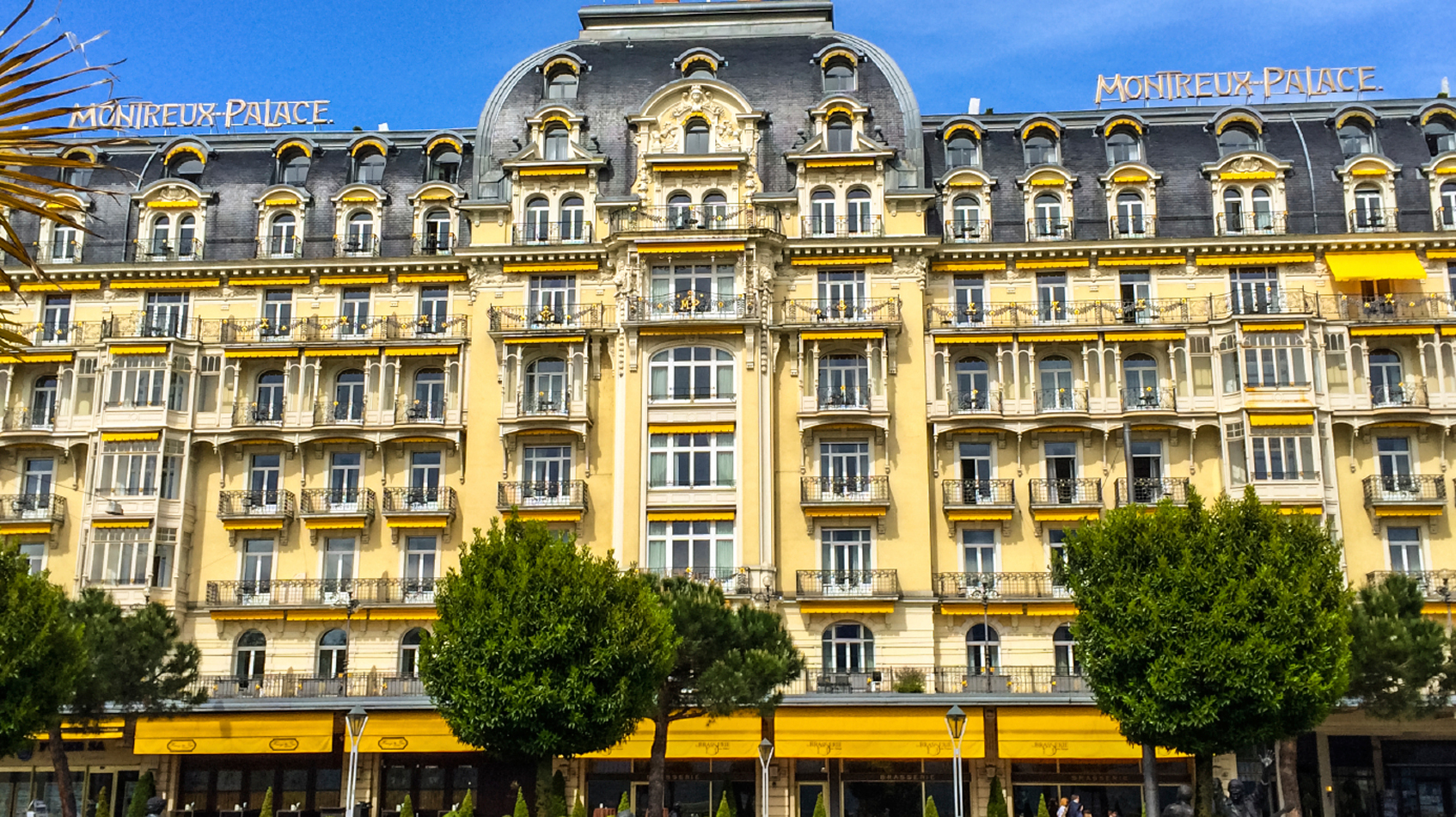 Opened in 1906, Fairmont Le Montreux almost instantly entered its golden age in a flurry of Venetian parties and masquerade balls that drew in Russian princes, New York bankers and Maharajahs from all over the world. In 1936 the globe’s gaze fell again on the hotel as it played host to the Montreux Convention, and it later attracted fame as the permanent home of the author Vladimir Nabokov. A place hallowed by great titans of literature such as Rousseau and Lord Byron, the hotel is one of Switzerland’s greatest assets.

Jewels of the Aegean

Situated on the edge of Syntagma Square, the Grande Bretagne was originally the house of a wealthy businessman, but it’s rarely strayed far from the nation’s political spotlight since falling out of his hands. The headquarters of several military forces in the middle of the 20th century, and the home of former Prime Minister Georgios Papandreou during the early stages of the Greek Civil War, intrigue has never travelled far from its corridors. Renovated at great cost in 2006, the hotel offers views of Lycabettus Hill, the Acropolis and Parliament, and is one of a handful of hotels in Europe that still upholds the standards of a vanished age. 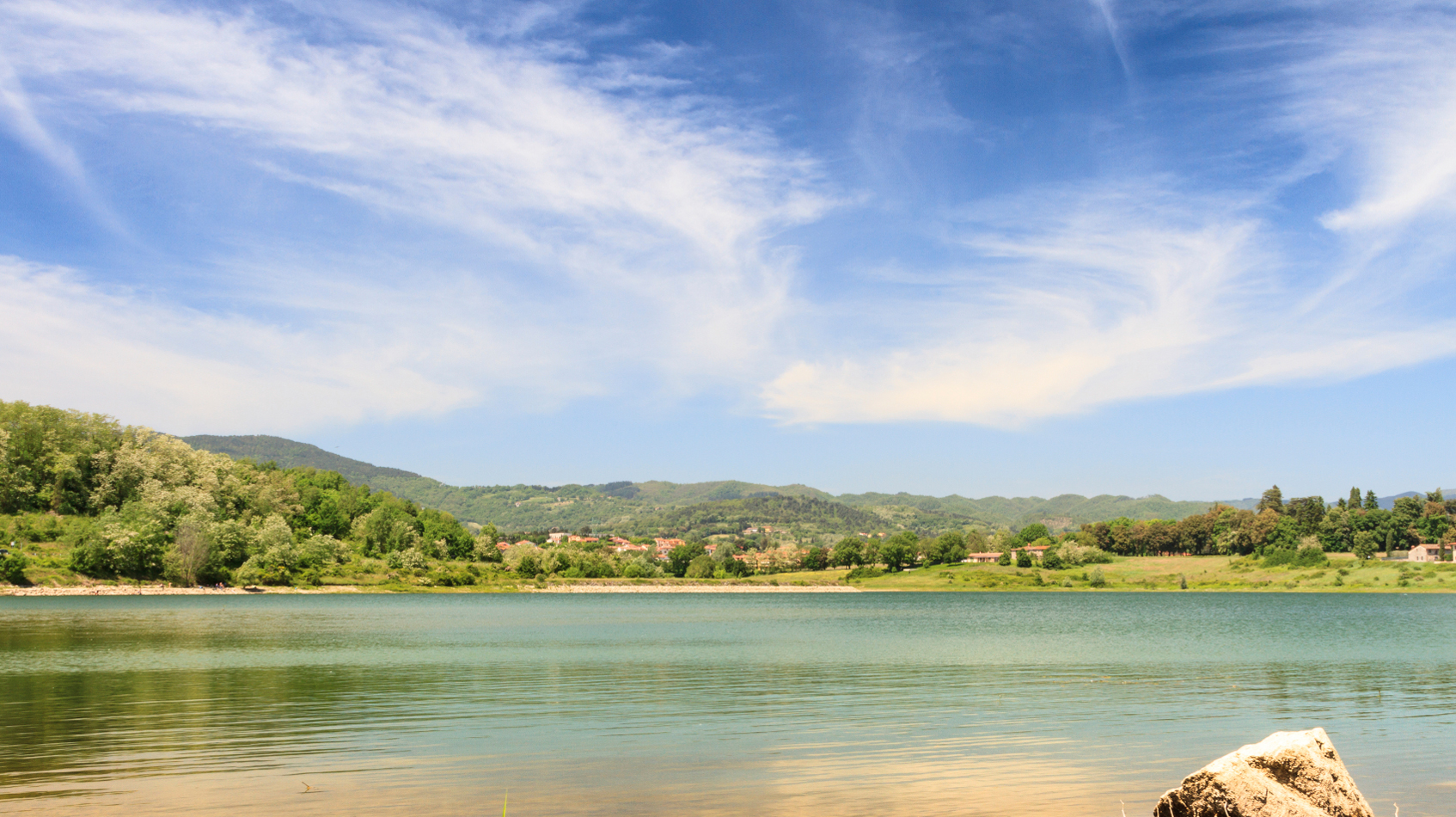 A stunning villa originally built in the mid-16th century at the top of a rise on the road from Florence to Bologna, Villa le Maschere commands an impressive vista of the Mugello valley. Such a large pile has hosted a Pope and two Savoy Kings to name just a few notables. Fast-forward to the present and inside owner Milva Fusi has used bright, contemporary furnishings in a five-year restoration to make the villa as resplendent as it was in its heyday. Visit if playing the Renaissance prince or princess has remained on your to-do list for a while.

The Hotel Bristol’s first celebrity guest was Gustav Mahler, which is unsurprising perhaps given its location opposite the opera house. Edward, Prince of Wales soon followed in 1935, and, after WWII, the US embassy was relocated here. In 2009 it had a renovation that ran into millions of dollars and it’s now a majestic mix of marble, crystal and gold leaf. If visiting, ask for a top-level room overlooking the Ringstrasse, there you can watch the sun setting over the mountains, rounding off your day in a drunken haze of colors.

These heritage hotels and others are available on a range of different journeys; visit Insight Vacations for more information.

Previous
Le Dauphin: An Interview with Chef Mathieu Le Guillois
Next
Travel Memories to Hold on to

Insight Vacations
February 2, 2016
Previous
Le Dauphin: An Interview with Chef Mathieu Le Guillois
Next
Travel Memories to Hold on to
You might also like