One of the most energetic and fun-loving Hindu festivals, Holi festival in India sees people of all castes come together to chant, drum, and frolic while paint powders (abir) of every hue explode overhead in a rapture of color. It’s all done in the name of female demon, Holika, from which the name of this festival, “Holi”, is derived. Sister to Hiranyakashyap, a demon king who wanted his son killed for revering Lord Vishnu instead of himself, Holika is supposed to have gone to punish the boy (Prahlad) by having him burned alive. In the event, however, the powers that were supposed to protect her saved Prahlad instead and she perished in the flames.

Observed all over India, but especially in the North, Holi festival celebrates evil getting its comeuppance and love being elevated as divine, the bringer of brotherhood and harmony. But far from being a matter of quiet religious contemplation, this message plays itself out on the streets, in homes, cafes and restaurants, as estranged friends apologize, family members explain away misunderstandings and colleagues exchange gestures of goodwill. This is nothing short of repentance on a mass scale, the atmosphere charged with elation as people forget, forgive and love to their heart’s content. 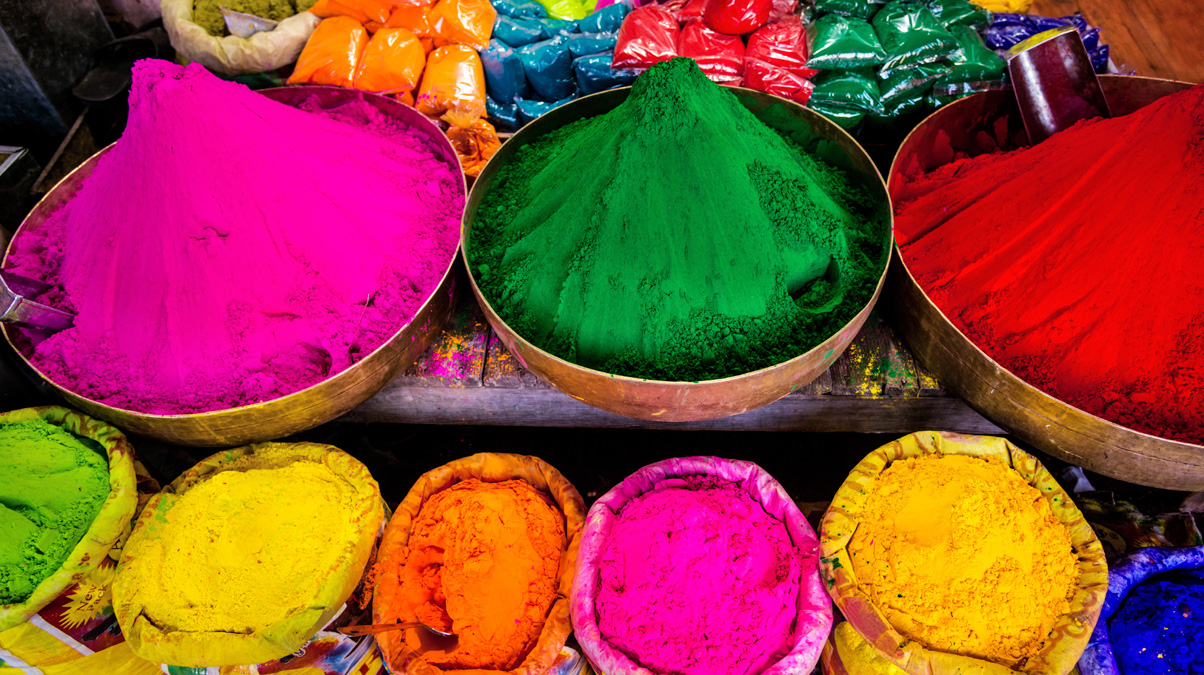 Known variously as the festival of “love” or “colors” and held at the approach of the spring equinox, originally the bonfire ash that symbolized Holika’s demise was used in a rather monochrome version of today’s proceedings. These days, however, it’s not just dry powders that splash across the sky – there’s an array of color-carrying vessels from water balloons to water guns. And in the chaos, everybody – whether friend, foe or stranger – is a legitimate target.

Celebrated for centuries – some records stretching back to the 4th century BC – the typical setup is simple. Days before the festival, people collect wood for a bonfire, buy lots of grain, coconuts and chickpeas (as these are typically thrown on the fire in moments of joy), and then practice their dance moves. In the meantime, Holika effigies are built and lots of seasonal dishes such as gujiya (sweet dumpling), mathri (biscuit) and malpuas (pancakes) are prepared, before Holika is sent up in flames on Little Holi, the night before the main event.

But neither “Little” nor “Big” Holi is celebrated in a uniform manner. How could it be in a country the size of India? Each area has its customs and eccentricities. Places that claim to be Lord Vishnu’s homeland, for instance, allow the festival to last over two weeks. In other locations, women beat men’s makeshift shields with sticks, and even more unusual are the provinces where pots of buttermilk are hung high over streets. Men and boys form human pyramids in a bid to reach the buttermilk, (whoever ends up at the top eventually toppling the pot to become, “King of Holi”), while women and girls try to distract them by throwing buckets of water.

So put on some old clothes, stock up on your own supplies of abir and then hit the streets with plenty of goodwill. You’ll need it in the chaos ahead. It’s telling that the saying that rings sporadically out of the crowds is, “buran a mano, Holi hai!” or, “don’t be offended, it’s Holi!”

If you want to experience Holi’s good vibes in real life, why not join us for a once-in-a-lifetime experience celebrating the festival in India? Start planning your celebrations here.

Insight Vacations
March 5, 2020
Previous
A Valentine’s Day Tale of Love and Oysters
Next
The Secret Ingredient – Thoughts on International Women’s Day
You might also like
One of the following
January 26, 2023