Christmas has different meanings all over the world, but it’s the one time that everything feels a little brighter and full of joy. This year, you may not be celebrating in your usual way; many people won’t get to travel or spend time with their family. However, that doesn’t mean that we can’t embrace the festive feeling and we can also plan for the future, which looks more hopeful with each passing day. Hang up some fairy lights, pop a Christmas playlist on and dream of the Alpine Christmas markets that you can visit next year.

As a little boost, we’ve sought out a selection of Christmas traditions from around the world to make you smile. Some of these will feel familiar, some completely foreign while others are downright wacky, but each and every one has a little festive flair. From newer traditions such as ‘The 12 Pubs of Christmas’, which started in Ireland around a decade ago, to ancient pagan practices such as hiding the broom in Norway that date back more than a thousand years, these holiday traditions may be ones that you decide to spice up your own celebrations this year. 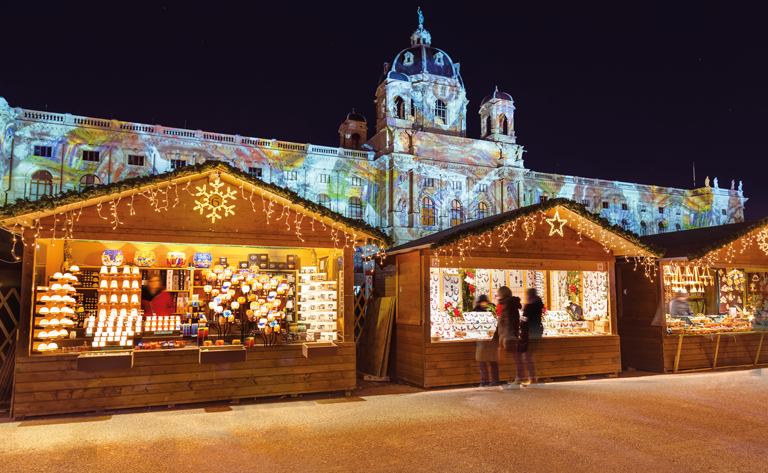 If you‘re looking for the most traditional immersive experiences for Christmas, then visiting a Christmas market will fulfil your inner elf. Every year travellers come from afar to sample the best Christmas markets in Europe, with around 85 million visiting Germany alone. This tradition dates back nearly 800 years and it was borne out of a street market in Vienna where locals stocked up on necessities for the cold winter ahead. The first Christkindlmarkt took place in the town of Bautzen in 1384 and spread to other towns, who started adding seasonal treats and decorations with each passing year, to evolve into the wondrous markets we see in European towns and cities today.

Rather than simply a shopping experience, most visitors treat the Christmas market as a day or night out. They are a great place to pick up unique gifts and artisan food items, as well as locally-made decorations that you won’t find anywhere else. The largest Christmas market in Europe is on Rathausplatz in Vienna, with an 32,000 square foot ice-rink, an advent theme park and up to 200 stalls packed with Christmas goodies and so many lights it’s probably visible from space, or at least the peaks of the Alps.

Of course, Christmas markets are synonymous with glühwein, the warm German beverage that is made for heating you up as you stroll from one candy-striped stand to another. Known as vin chaud in France, glögg in Sweden and mulled wine in English-speaking countries, this hot spiced drink is an ideal winter warmer.

Make Your Own Glühwein at Home 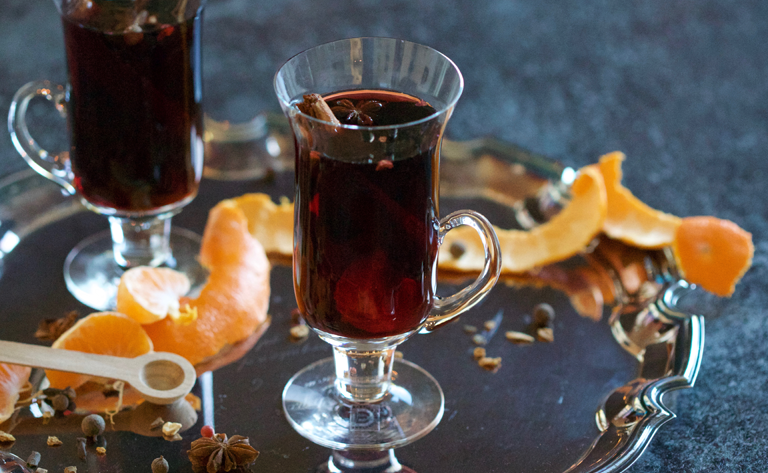 Photo by Gaby Dyson on Unsplash

While waiting for the time when it will be safe to travel again, you can fill up your home with the wonderful aromas that evoke memories of strolling arm-in-arm around a European Christmas market by following this simple recipe.

You need: A large saucepan and a ladle

Heat the red wine in the large saucepan on a low heat, don’t bring it to the boil. Slice the lemon and add to the wine with the cardamom, cloves, cinnamon, star anise and sugar. Stir slowly until the sugar dissolves, then leave to simmer gently for 10 – 15 minutes. Remove the cardamom, cinnamon, star anise and lemon and pour into crackproof or heatproof glasses with a ladle. Serve immediately.

You may want some Christmas foods to accompany your glühwein, so we’ve chosen some alternative Christmas delicacies that appear on festive tables across the world. 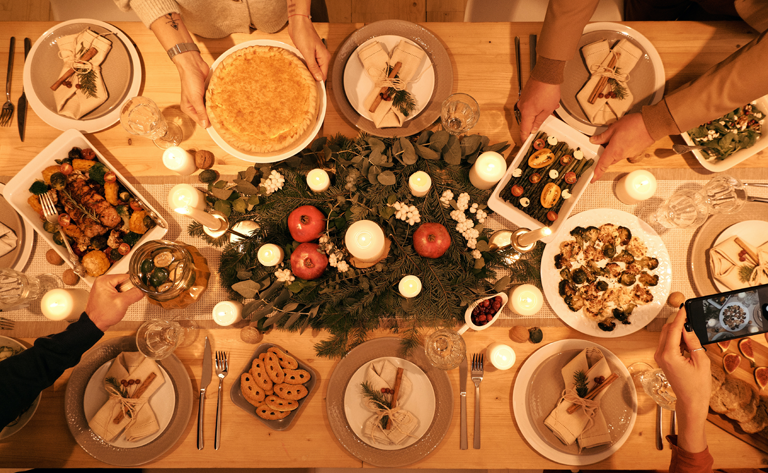 As well as being all about family, no one can doubt the importance of food at Christmas. A feast is at the centre of every festive celebration and while turkey is the traditional meat preferred in countries such as the U.S. and U.K., it’s rarely seen outside these borders.

On December 23, Icelanders observe a tradition of eating fermented skate, usually washed down with a local liqueur. The practice is in honour of St. Thorlákurs, the patron saint of their country, who died on this day in the 12th century. Aussies typically have a barbie (barbecue) on Christmas Day and prawns are a staple, along with grilled meats. Christmas dinner in Switzerland can come in many varieties – some families like a fondue chinoise (meat fondue) or filet im teig (pork fillet wrapped in pastry and stuffed with sausage meat). If you’d like to book some Christmas travel to Germany, you’ll find an enchanting spread awaits for your festive meal. The main meat for Christmas dinner is duck, goose or rabbit, typically served with sides of red cabbage and plump bread dumplings. Dessert is an important feature too, and here Stollen is the star of the show, although plenty of lebkuchen (Christmas cookies) are required too.

Stollen is a yeast bread full of dried fruits, nuts and spices and dusted with powdered sugar to reflect the snow-covered German landscape. First created in Dresden in the 14th century, it became known as ‘the food of kings’ due to a special dispensation given by the Catholic church to use butter during the fasting period of Advent. If you’re missing your German Christmas vacation this year, you can bring some of that festive flavour into your kitchen with the following recipe. 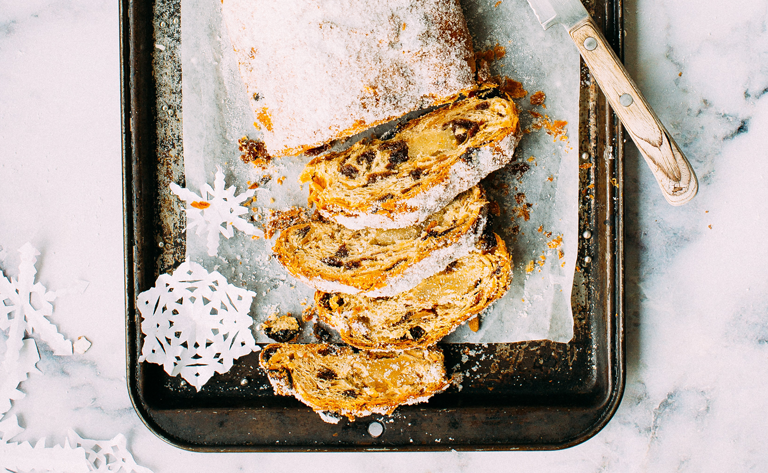 Photo by Jennifer Pallian on Unsplash

You’ll need a large baking tray for this, but if your oven is smaller, you can split it into two loaves.

Possibly the oddest Christmas dinner is found in Japan, where families like to eat ‘party barrels’ of KFC. From a marketing idea in 1970 by a KFC branch manager in the country, it has become a national phenomenon and the barrels need to be ordered weeks in advance to ensure that the family can have their ‘finger lickin’ good’ dish on Christmas day.

Decorate Your Home with Christmas Ornaments from Abroad

The history of the Christmas Tree goes way back to ancient times. The Greeks, Romans and Vikings all hung evergreen boughs in their homes during the winter, as a symbol of everlasting life and bountiful crops. However, we have the Germans to thank for the current tradition of decorating the tree. In the 16th century Christians began bringing pine or fir trees into their homes as a symbol of Jesus’ everlasting life. They were brought to America by German settlers in the 18th century but widely viewed as a pagan or heathen tradition until the late 19th century when it became more fashionable among the elite members of society to have a brightly-decorated tree. Nuts, apples and marzipan cookies were the earliest decorations used on the tree, along with candles. Then glass baubles were introduced, which also came from a small town in Germany, Laushka, and now the tradition of adding them to the tree is worldwide. In Poland, it is common for children to make their own decorations and in the east of the country, they create beautiful tree decorations from straw.

Of course, decorating the house for Christmas wouldn’t be complete without some festive fairy lights. Across the United States, it may seem like some neighbours try to out-do each other with their Christmas displays, but there is nothing quite like the Ligligan Parul in San Fernando, a city near Manila in the Philippines. This dazzling lantern festival illuminates the city with thousands of spinning lights to represent the Star of Bethlehem.

The Advent wreath is a Christian tradition, which began in Lutheran churches in Germany in the 16th century. A red candle is lit every day from the beginning of December and a larger white candle on each Sunday of Advent until Christmas Day falls. The tradition spread among Christian churches but it’s not believed to have reached the United States until around 1930. In the U.K., candles were replaced with baubles due to the fire hazard they created. In Ireland, a red candle is placed in the window as a symbol of welcome to travellers, symbolic of a place to stay for the holy family.

Which Day is Christmas?

Across the U.S. and U.K. December 25 is the day that we gather around the table for a huge feast, share presents and fight with families over the remote control or a board game. The same applies in Australia, South Africa, Indonesia and Ireland. However, some countries have their celebration on completely different days ranging from December 24 to January 7.

In much of Central Europe, the most important day is Christmas Eve. In Sweden on December 24, families gather around the Julbord (Christmas table) and dine on a variety of special dishes that includes meatballs, fish, cheese, potatoes and bread dipped in ham broth. Presents are exchanged and instead of Santa, a small gnome-like creature shows up bearing gifts. Poland’s main day of celebrations is also December 24, although the treats don’t begin until night falls. Polish people fast from the time they wake up and then as the first star appears in the sky, the families break oplatek (a religious wafer) together before the feast begins. The meal consists mainly of fish and other Polish specialties, but no red meat for religious reasons. An extra place is set at the table for anyone who should show up without the need for an invite.

In the Czech Republic, families come together to celebrate on Christmas Eve for a huge dinner where the main dish is often fried carp. An interesting custom that Czech families carry out is one of keeping the fish live in the bathtub for a few weeks leading up to Christmas, when it almost becomes a family pet. Nowadays, it’s common for the fish to be released back into the river, rather than being eaten, to avoid any cruelty.

Further west in Europe, the Portuguese mark the occasion by meeting with family for dinner as late as 10.00 pm on Christmas Eve and at exactly midnight, they exchange gifts. Then it’s common to head to midnight mass to catch up with neighbours and friends and some towns have fireworks in the square after the ceremony.

Not many places can feel as festive as Austria around Christmas. St. Nikolaus, the figure from whom Santa derives, leaves tokens for good children on December 6, when he fills their boots with sweets and gifts. On December 24, the Christmas tree is lit up and families join around them to sing carols. Stille Nacht, or Silent Night, as we know it, was written in the Austrian village of Oberndorf in 1818.

The latest day that Christmas is celebrated is on January 7, when Orthodox Christians observe the birth of Jesus. This is due to the fact that these countries celebrate feast days according to the Julian calendar, which is around 13 days behind the Gregorian calendar. So, if you’re visiting Russia, Greece, Serbia or Belarus for your January vacation, you may have the opportunity to celebrate Christmas twice.

Insight Vacations
December 18, 2020
Previous
A Bridge from the Past to the Future
Next
2021 TTC Top Three
You might also like
One of the following
December 5, 2022