Switzerland is famous for its postcard-perfect scenery, with some of the most attractive views captured from the panoramic carriages of the Glacier Express. Whether chugging through looping tunnels (which are considered some of the longest in the world), over dizzying viaducts or below rushing ravines, there are plenty of opportunities to snap up some of the most picturesque panoramas in the country. Known affectionately as the slowest express train in the world, its route from Zermatt to St. Moritz covers over 170 miles, crosses almost 300 bridges, passes through 91 tunnels and takes roughly seven and a half hours from start to finish. A masterpiece of technical ingenuity on the inside and beautiful scenery on the outside, here’s a guide to capturing some incredible photos of Switzerland on your Glacier Express journey.

Winter view of Switzerland on the train © VogelSP/iStock

One of the most stunning sites in Switzerland, the Mattertal is fringed by a number of ‘four-thousanders’ in the mountain department, including the majestic Matterhorn and Weisshorn, as well as even older glaciers. Making the most of the area’s sensational contours, the Glacier Express dips with the valley down from almost 2,000 meters to the charming towns of Visp and Brig, which both sit at roughly 650 meters above sea level. 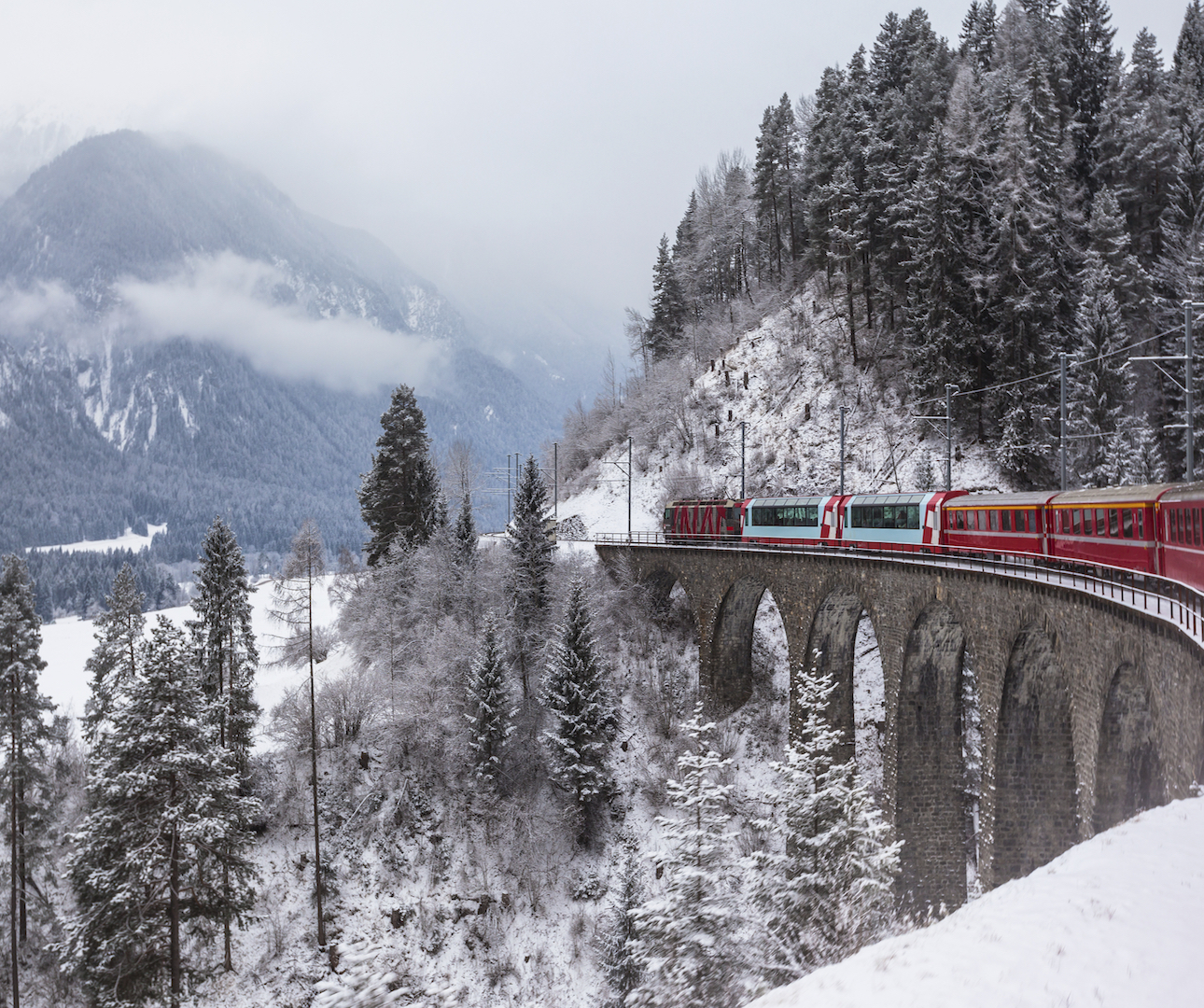 From Sedrun, the line becomes increasingly steep until the train reaches its highest summit at the Oberalp Pass, at 2,033 meters. Located near to the source of the Rhine, which is marked by a lighthouse, the pass gained importance when 19th century tourists insisted on being taken on horseback via its striking windswept scenery, and it has been an essential stop for budding photographers ever since. 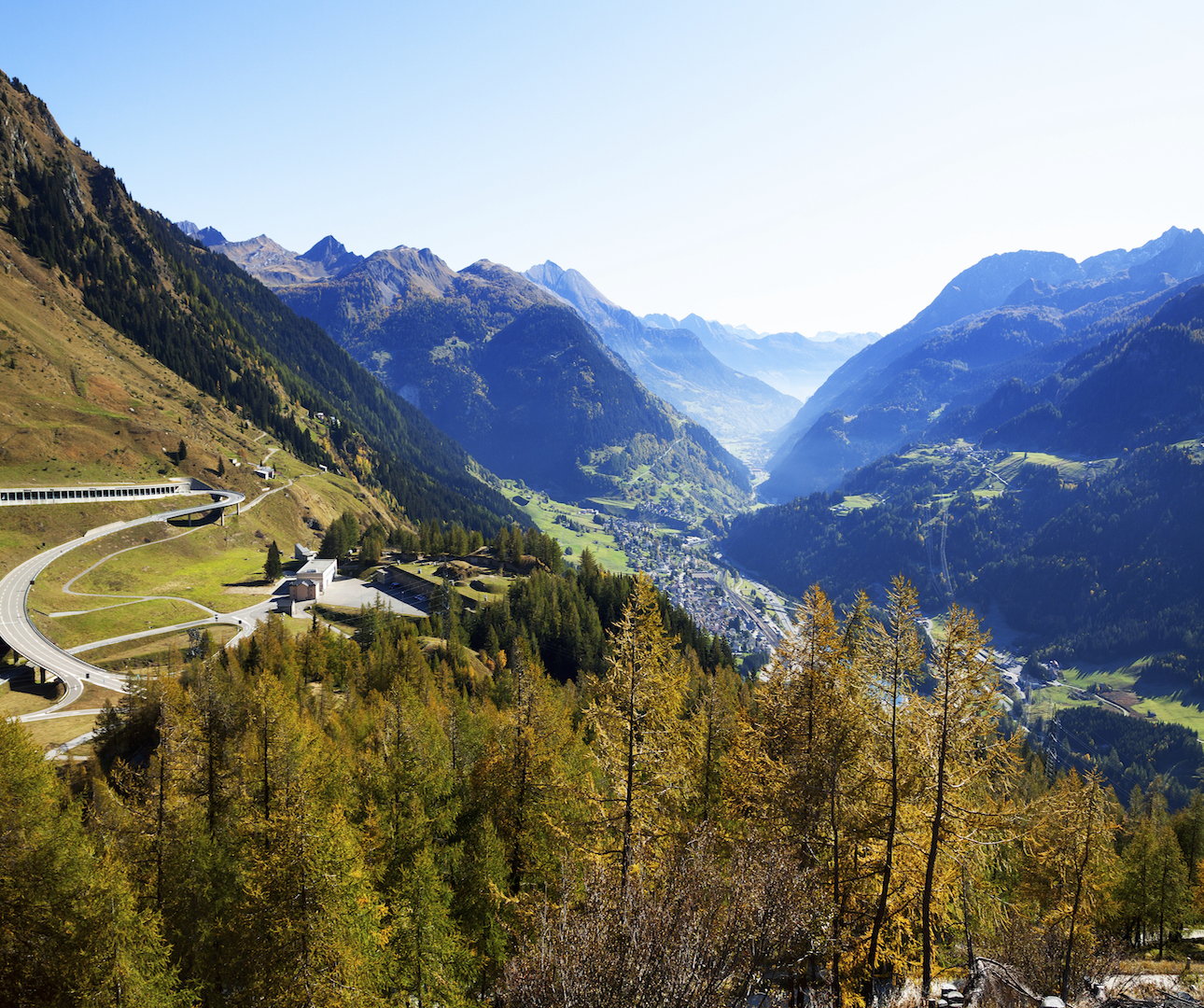 After leaving Disentis, the Glacier Express encounters a UNESCO World Heritage Site at the Rhine Gorge, also known as the Ruinaulta, which is as close as Europe gets to anything approaching the Grand Canyon. Created when 10,000 million cubic meters of rock broke off an even bigger mass thousands of years ago, the result – dotted with steep valleys, deep caves, fabulous wildlife and dark pine forests – undoubtedly makes for one of the most stunning photos of Switzerland. 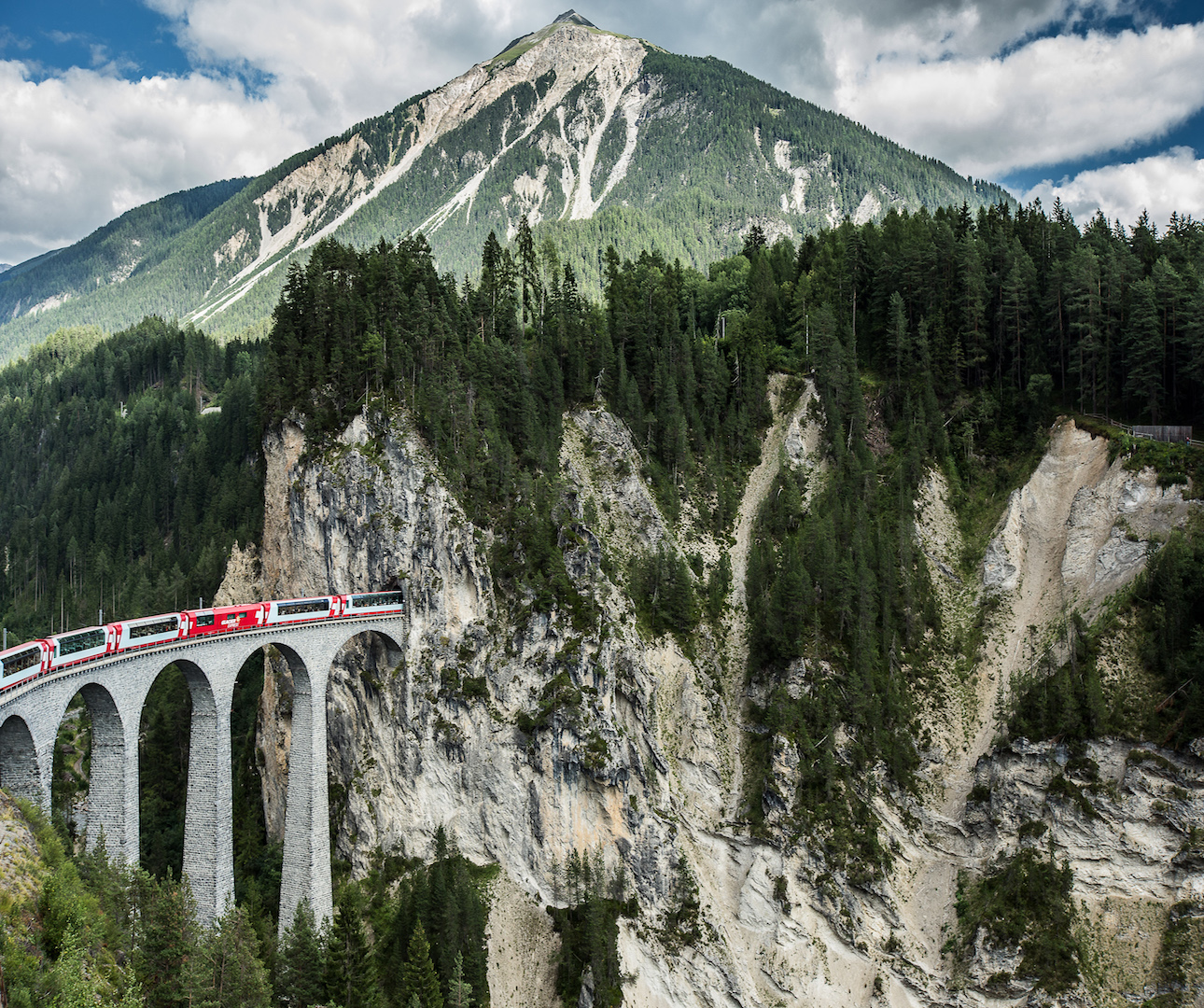 As the train follows the Albula Valley, just before reaching Filisur, it crosses the famous Landwasser Viaduct. Used as the main location for the Glacier Express publicity shots, this is quite possibly one of Switzerland’s most photogenic spots. Running from a cliff-edge on one mountain, across a vertiginous valley and then straight into a mountain tunnel, it’s easy to imagine such a scene from a James Bond movie.

Traveling on a train in golden autumn © VogelSP/iStock

Blend the tall peaks of the ‘roof of Europe’ with a chain of blissful lakeside scenes and you’ll have a good idea of what to expect from Engadin. Dominated by the chic ski resort of St Moritz, the area’s steep-roofed, wall-painted houses, surrounded by the country’s only national park, look like Narnia in the snow and a scene out of The Sound of Music in the summer. For one of the most iconic photos of Switzerland, keep your eyes peeled for the red funicular that runs up the Muottas Muragl Mountain – definitely one for the photo album.

If the sight of these stunning scenes has you itching to capture Switzerland on camera, book a spot on the Glacier Express on the Magical Switzerland escorted journey.

Insight Vacations
September 7, 2019
Previous
Moscow in 48 hours
Next
7 bonnie stops to inspire your trip to Scotland
You might also like
One of the following
November 17, 2022