What to See on Edinburgh’s Royal Mile 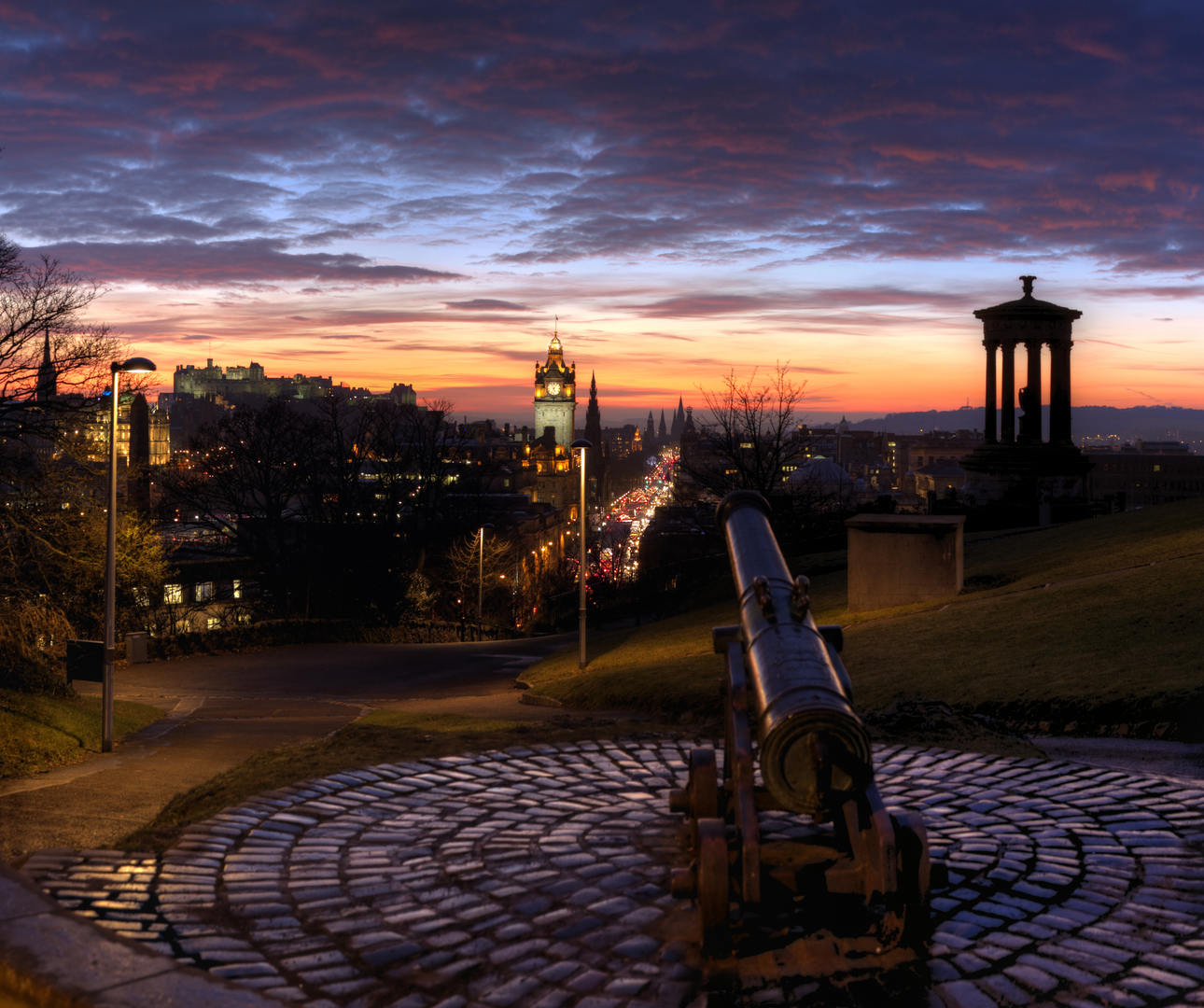 What to See on Edinburgh’s Royal Mile

Connecting Edinburgh Castle with Holyroodhouse Palace, the official Scottish residence of the Queen, The Royal Mile is arguably the city’s most important area. Jam-packed with cobbled courtyards, secret stairways, towering tenements and incredible cityscape views, without guidance it’s easy to become overwhelmed by the sheer amount to see here. To assist you on your discovery, we’ve put together a guide to what to do on Edinburgh’s Royal Mile, which explains the landmarks, residences and ancient myths that appear along the way. 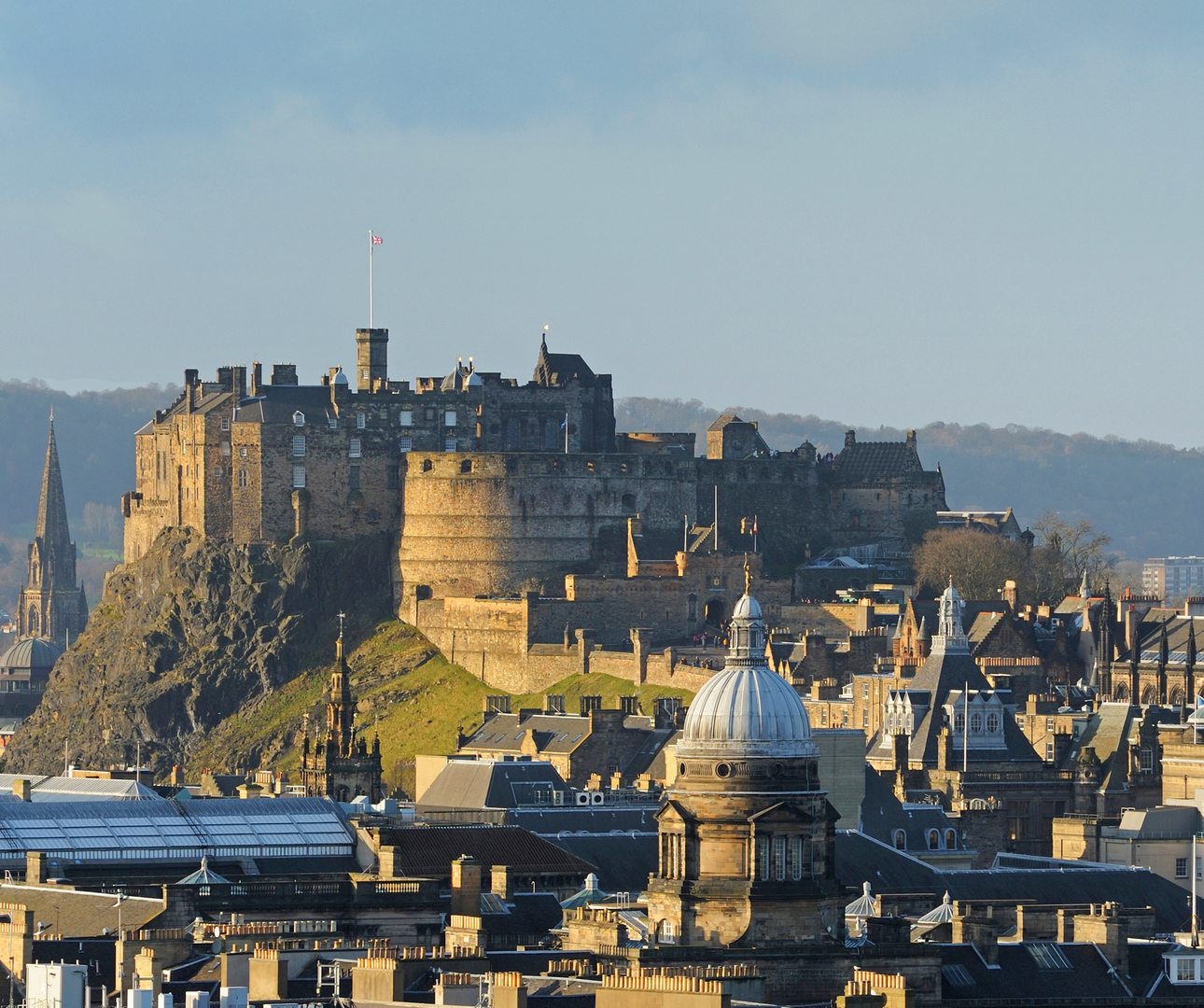 Sitting atop an extinct volcano and once surrounded by a loch, it’s no surprise this spot has been fortified for most of its human history. Now a Scottish icon, this tall, dark stone castle houses the Honours (Crown Jewels) of Scotland, the Stone of Destiny, the giant Mons Meg and the National War Museum.

Witches Well is not a traditional well for water, but rather a plaque on the eastern end of Edinburgh Castle’s esplanade, marking the spot where hundreds of women were burnt over the centuries for the belief that they were practicing black magic.

Despite its rather misleading name, The Royal Mile is in fact over a mile long and comprised of several different streets. Located on the right hand side as you walk from Castle Esplanade down Castle Hill, Cannonball House mysteriously has a cannonball embedded in its wall, rumored to have been fired in the direction of Holyroodhouse Palace in 1745, when the Young Pretender (Bonnie Prince Charlie) was resident in the Scottish capital. 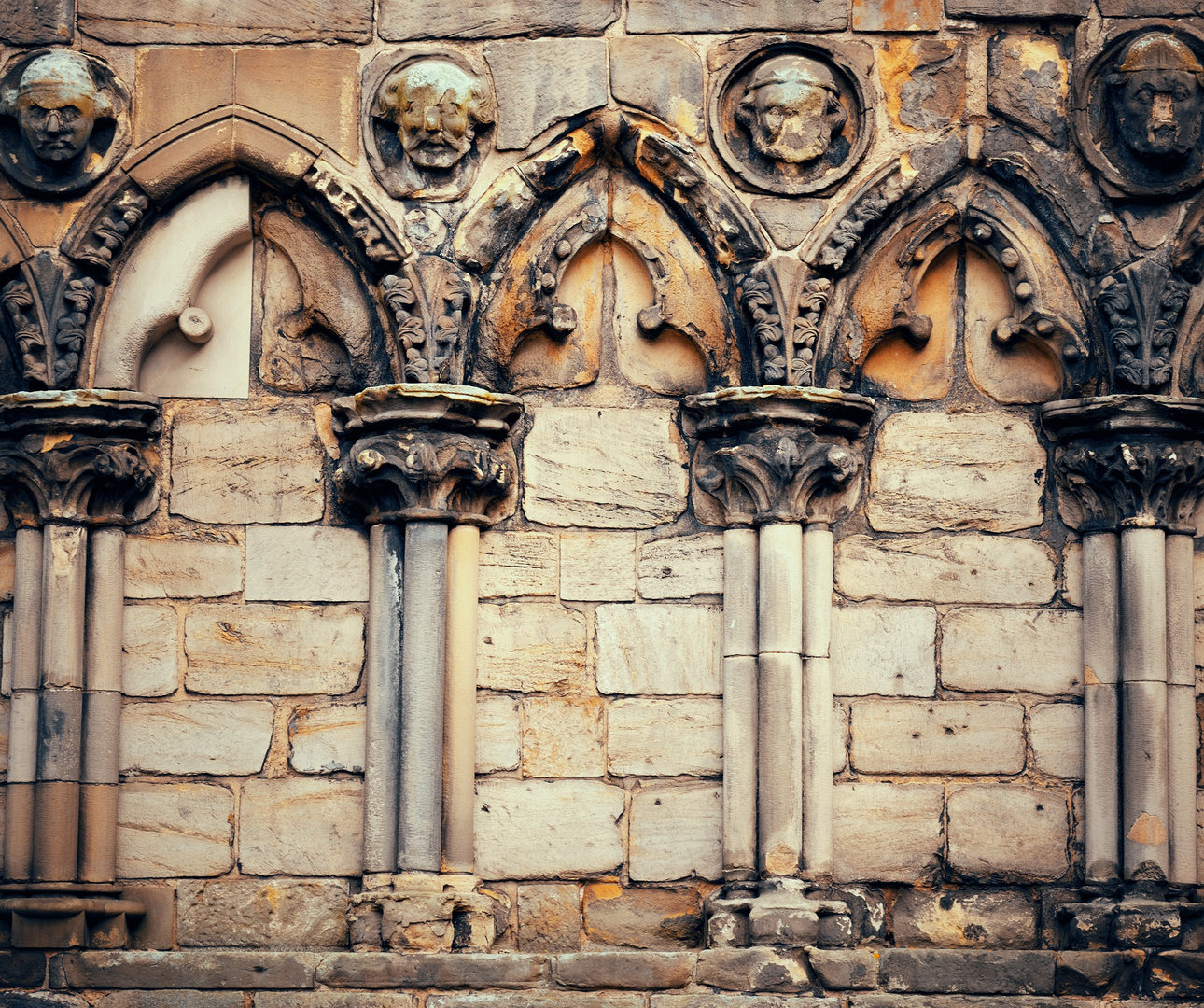 Thanks to its lofty spire, the kirk (today known as ‘The Hub’) looms even higher than the top of the Edinburgh Castle. Once the General Assembly Hall of the Church of Scotland, it’s now commonly used as a festival venue.

One of the best pubs in the city, The Ensign Ewart is named after one of the heroes of the Scots Greys, who captured the regimental eagle of the French 45th Regiment of the Line – one of its most prestigious – ‘by cutting through [the bearer’s] head’ at the Battle of Waterloo.

Dedicated to three of Scotland’s most famous writers (Robert Burns, Sir Walter Scott and Robert Louis Stevenson), no space goes to waste here, with etchings, busts and memorabilia all competing for the attention of visitors to the Writer’s Museum. 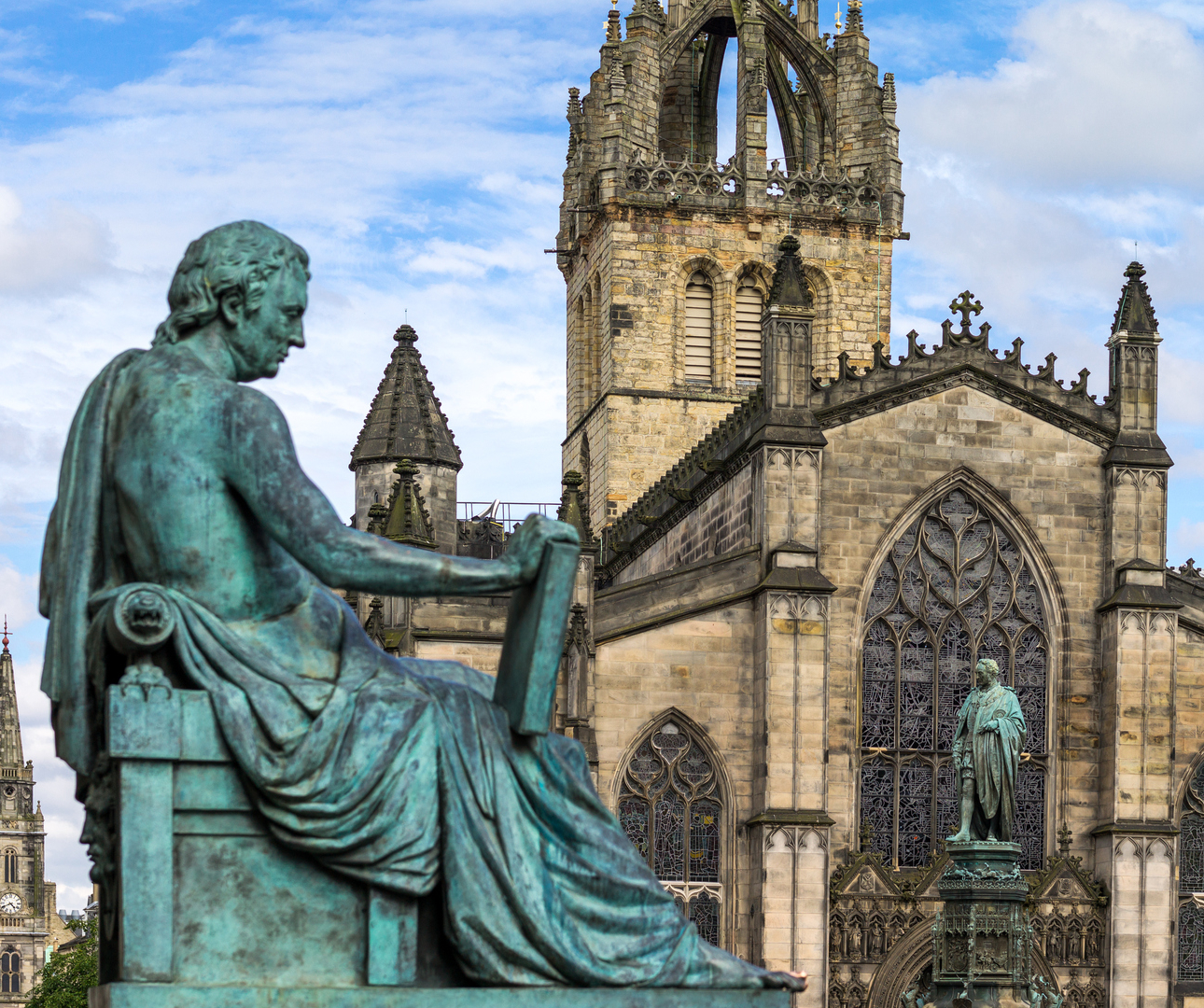 One of Scotland’s greatest philosophers, a rather Roman-looking statue of David Hume marks the spot where the High Street begins. Do as local students do and touch his toe if you want some of his wisdom to rub off on you.

St Giles is a beacon of Scottish history on Edinburgh’s Royal Mile. Thought to have been founded somewhere around 1124, St Giles was later burnt down and rebuilt in Gothic grandeur by the English, and adorned and adapted further over the years that followed. Today, St Giles still has a central role in the Presbyterian Church as the home of the Order of the Thistle (the Queen’s appointed chivalric company of knights in Scotland).

If you’ve had your fill of traditional Scottish pubs, the chic Monteiths is the perfect place to go for a leisurely dinner. Hiding behind a fairy-lit archway on the High Street, settle into an old tartan armchair with a pint of craft beer or dine on an indulgent chateaubriand for two. 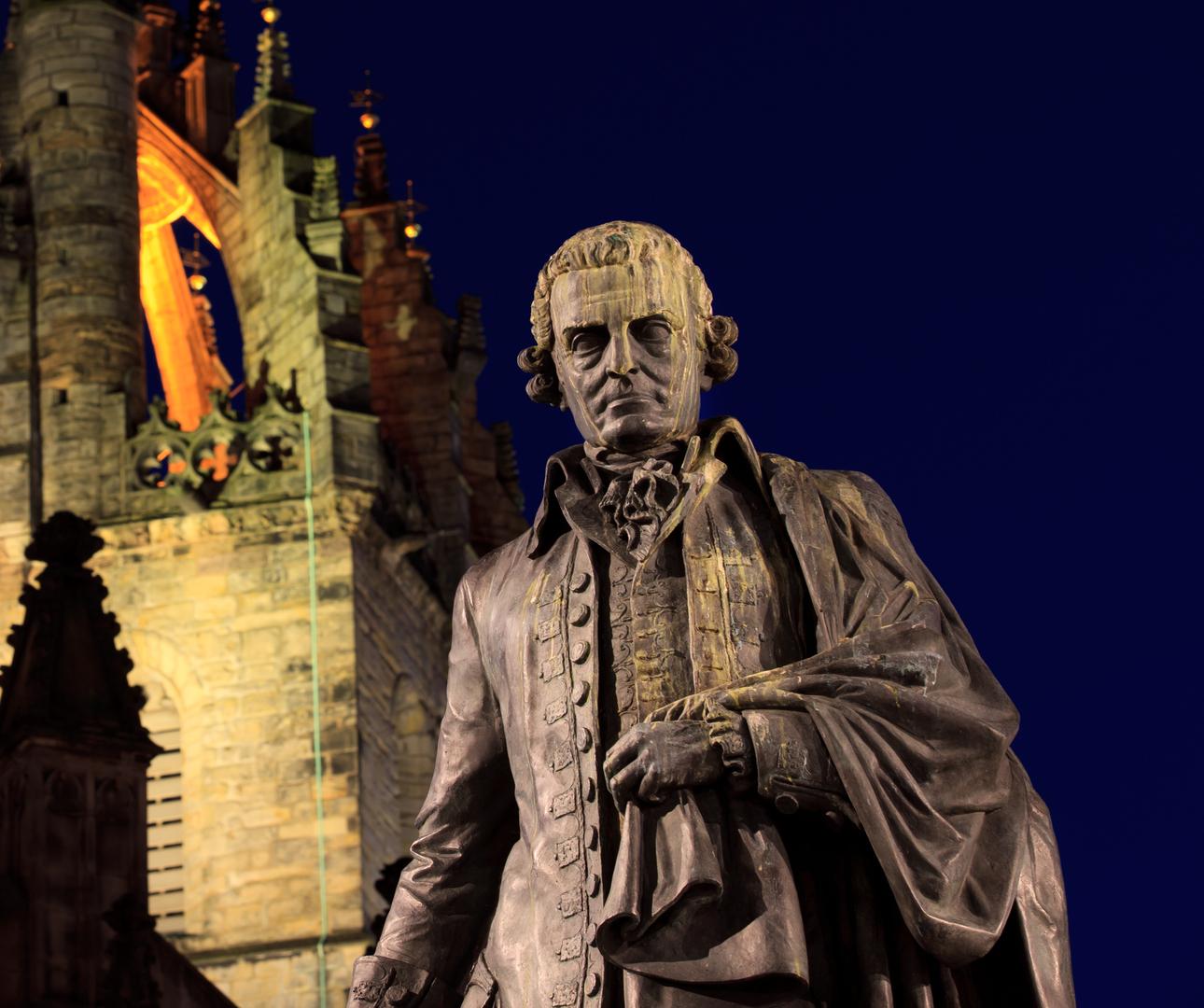 The author of the world’s first modern economic textbook is commemorated and cast in in bronze near the old Mercat Cross. A key figure in Scottish philosophy and economic thinking, Smith was known to have been friends with fellow academic David Hume.

Built in the neoclassical style that’s given Edinburgh the moniker ‘Athens of the North’, City Chambers was originally designed as a Royal Exchange but never proved popular with merchants. Now a Town Hall, nobody is quite sure what the statue of Bucephalus being tamed in its quadrangle is meant to represent…

Once a prison for Bonnie Prince Charlie’s enemies, Canongate Church is now more famous as the final resting place of a number of luminaries, from Adam Smith to the poet Robert Fergusson. 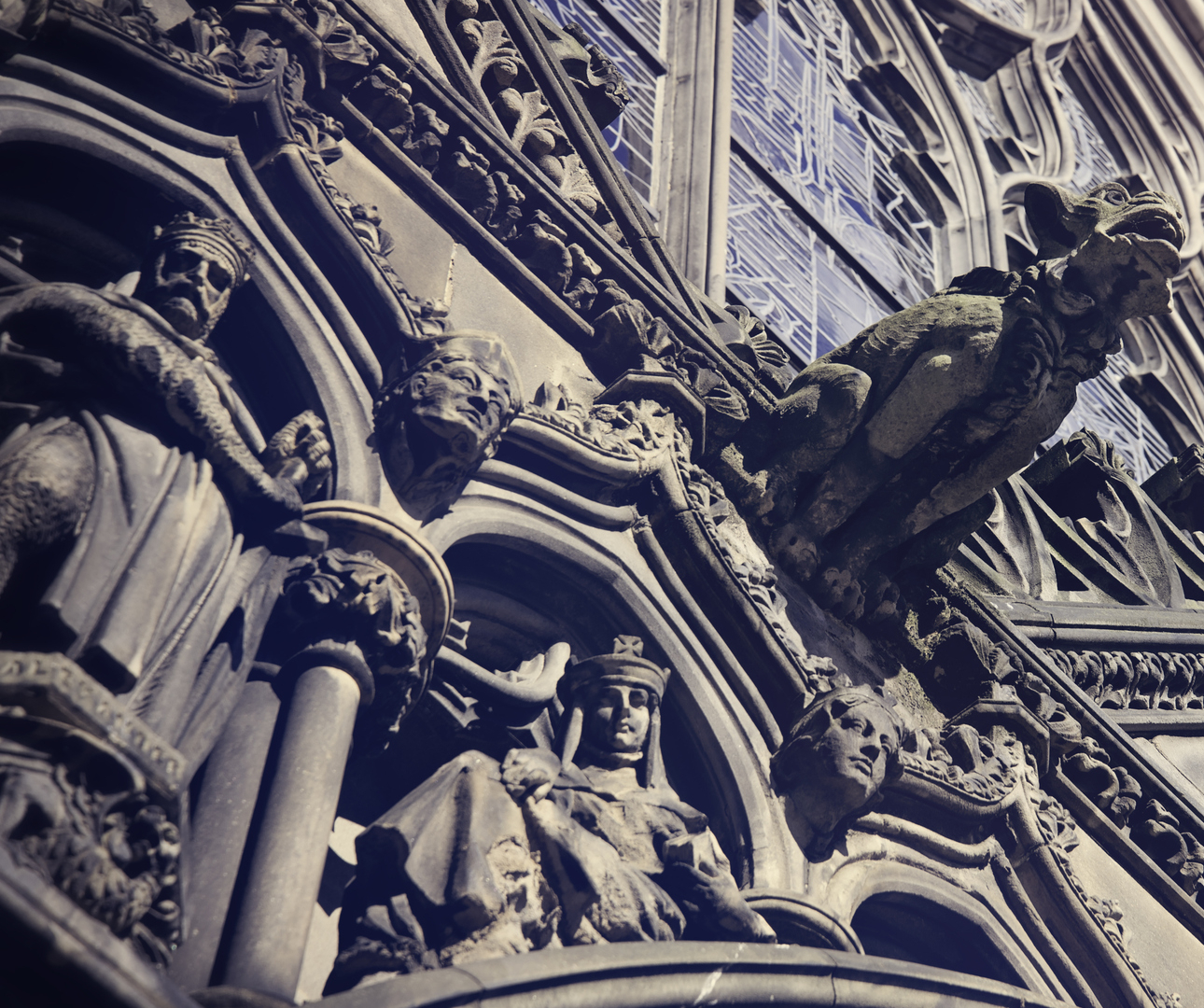 A large and traditional pub, Deacon Brodies is named after a local personality who would play the pillar of society by day and then the dissolute gambler, thief and adulterer by night. Eventually hanged in 1788, it’s said he even had a hand in designing the gallows he swung from.

The joint effort of Spanish architects EMBT and Scottish partners RMJM, the Scottish Parliament was built in a controversially modern style and opened in 2004. One proverb on the Canongate side of the building reminds Scots to ‘say little but say it well’.

Lots of places served Scotland as a capital before Edinburgh, meaning when royalty did seek to make its mark they had to build next to an abbey (the Holyrood). Best known for the gruesome murders and intrigues of Mary Queen of Scots, today the sumptuous state apartments and Royal Collections of art attract an international cast of visitors.

If exploring the treasures of Edinburgh’s Royal Mile appeals, why not book a place on the Country Roads of Scotland trip, and listen our bagpipe-tastic Scottish playlist to get you in the mood.

Insight Vacations
December 4, 2016
Previous
Insights from Frequent Traveler Lesley Spence
Next
Five Reasons to Visit Canada in 2017
You might also like
One of the following
January 26, 2023