European cities are known for their beautiful architecture, from the sculpted pillars, domes and architraves of Rome’s historic churches and temples to the Baroque and Gothic treasures of Prague. Many people plan visits to these cities purely to marvel at the magnificence of these buildings, and while all these wonders must be seen, there’s also the opportunity to see some lesser-known architectural marvels, both old and new, across the continent.

For guests seeking more sustainable travel options, adding some of these to your list will ensure that you are supporting different communities through your tourism. You’ll also have the benefit of more unique experiences to talk about on your return.

Whether you prefer the story behind the structure or marvelling at the innovation of these creations, Europe has a plethora of fascinating designs that architects have dreamt up over the years. Read on to discover a selection of the strangest architectural wonders that you can see before, during or after your Insight Vacations adventure. 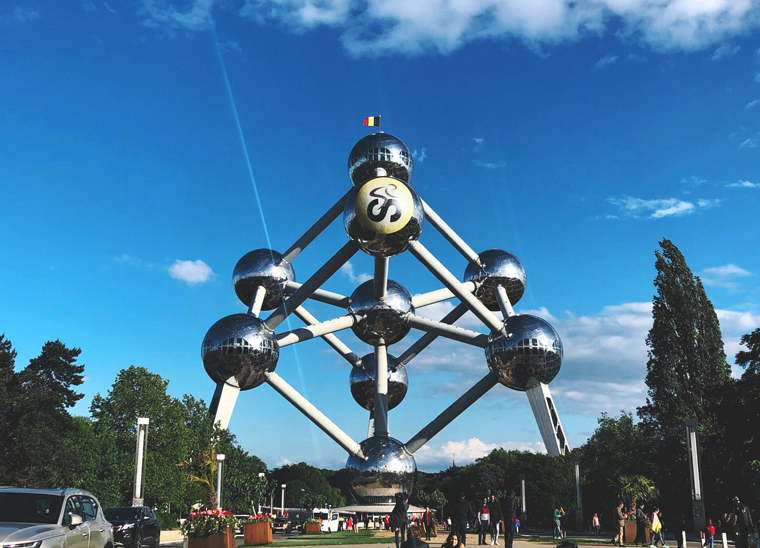 Originally constructed in 1958 for the Brussels World Fair (Expo) that year, this incredible structure still looks like something from another planet, or at least something from a sci-fi movie. It was intended to be a temporary structure, but now is a permanent feature on the city’s skyline. Insight Vacations’ Country Roads of Belgium, Luxembourg and the Netherlands begins in Brussels, so fans of unusual buildings should take the opportunity to see this fascinating building.

The 335-foot-tall structure comprises nine interconnected spheres that represent an elementary iron crystal enlarged to 165 billion times its size! Designed by the engineer Andre Waterkeyn, the aim was to represent faith in technology and provide an optimistic vision for a scientific future. It was originally covered in aluminium but when it was renovated in 2004, stainless steel was used, and the aluminium was sold off as souvenirs to help pay for the work.

It’s also worth exploring the interior of the Atomium, as design enthusiasts will appreciate the immersive permanent exhibition about the development of the project and the 1958 Expo. A panoramic restaurant offers great views across Brussels and temporary exhibitions are held regularly. Even riding the elevators is a cool experience in this futuristic structure. Visitors to Brussels can take the metro line 6 and disembark at Heysel station to see the Atomium. 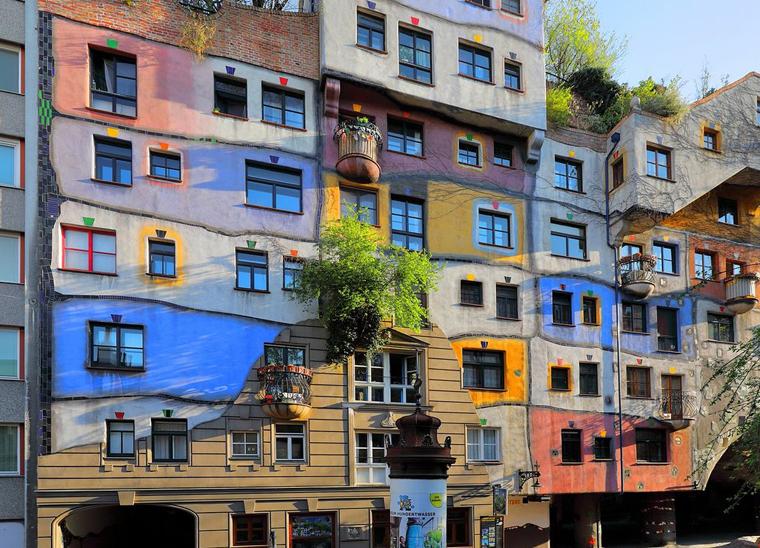 One of the most visited buildings in Vienna, the Hundertwasser house is named after its creator, Friedensreich Hundertwasser, who was invited by the federal chancellor to design a municipal apartment building that was harmonious with nature.

The foundation stone was laid in August 1983 and the house was presented to residents in February 1986. 900 tons of soil were used to create large and small green areas throughout, with some reserved for spontaneous vegetation. To this day, residents of the building have the final say on how the façade surrounding their windows is decorated. This is truly a balance between humans, architecture and nature, which is just how the environmentally minded architect intended it. Hundertwasser did not accept any payment for his passion project, but he requested of the mayor that nothing that he considered ugly ever be built upon the site.

Located in the Landstaβe distict on the corner of Kegelgasse and Löwengasse, this expressionist fantasy is now a symbol of the city and a whole tourist attraction, the Hundertwasser Village has sprung up around it. There you can have a drink at a bar with a stream, admire the mosaics and think about the opportunities for more green housing. The Bohemian tour begins and ends in Vienna, giving you the chance to see the Hundertwasser House as part of your holiday. The intriguing architect also has a number of other projects around the city, so you could plan a whole tour around his work.

Just over an hour from the elegant coastal city of Porto, Casa do Penedo is a house hewn from stone on top of a hillside. It’s a curious sight, and looks prehistoric, but it was actually built in the early 1970s by the engineer Guimaraes, who planned to use it as a rural retreat for his family holidays. Due to the attention the house received, the family moved elsewhere but it now operates as a museum, so you can enter the interior and see the cozy set up within.

It’s worth going inside, if only just to see the sofa made of eucalyptus wood and concrete that weighs almost 100 pounds. The rooms are a variety of shapes, owing to the geometric features of the rock. There’s even a swimming pool that belongs to the house, also made from stone. It also blends perfectly with the surrounding landscape, almost camouflaged with the rocky landscape. It is fascinating how it was constructed from four boulders and it has been touted as the strangest house in the world on social media.

Guided tours are available and a variety of incredible experiences, from a concert in the Casa to regional green wine tasting and even a themed dinner with an astronomy talk (the lack of light pollution makes this an incredible place to stargaze). Insight Vacations guests on the Country Roads of Portugal tour have a full day to spend as they wish in Porto, so a tour can easily be arranged to see the weird but wonderful Casa do Penedo. 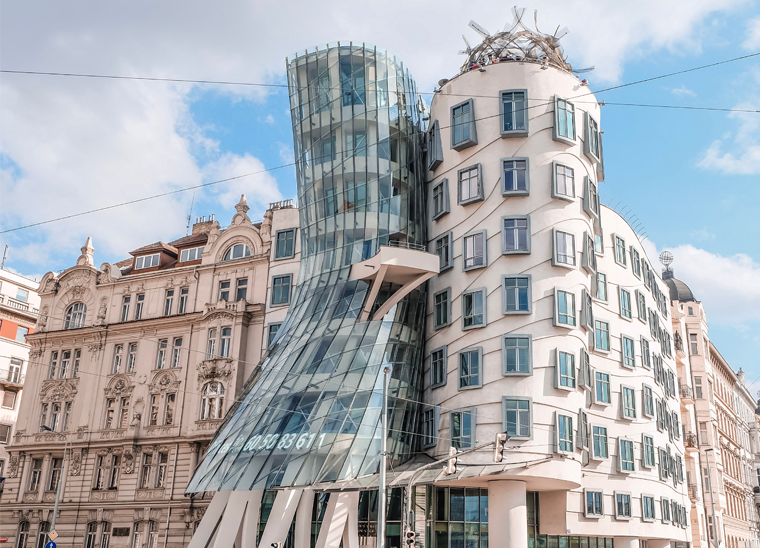 The National-Nederlanden building in Prague is starkly contrasted with the Art Nouveau and Gothic structures that surround it, but the controversy that once surrounded it has long died down. Former president Václav Havel dreamed that the site, which had stood empty since the end of World War II, could be a great cultural center and when the Dutch company bought it, they agreed that their modern headquarters should be a bold statement.

The highly esteemed Canadian-American architect Frank Gehry teamed up with Czech-Croatian architect, Vlado Milunic to execute the intricate design, which features 99 different shaped panels on its exterior, giving the impression of a pair of dancers. Milunic wanted to symbolize the transition of the country from communism to democracy, demonstrating this by having one part of the building static and the other dynamic. The style is known as deconstructivism, characterised by the heavy asymmetry of the design. The Dancing House took home Time magazine’s award for design in 1997, a year after its completion.

Insight Vacations’ guests traveling on the Easy Pace Budapest, Vienna and Prague trip reach Prague on Day 8, giving you ample time to explore the dramatic architecture throughout the city, including The Dancing House.

Visitors to Barcelona flock to Gaudi’s most famous project, La Sagrada Familia, but many other remarkable examples of the architect’s work can be found throughout the city. Casa Mila, or La Pedrera as it is also known, is located on Passeig de Gracia, a quirky boulevard with a selection of unconventional buildings.

Bought in 1905 by Pere Mila and Roser Segimon, the couple chose Casa Mila as their home and wanted some apartments available to rent out in the same property. They commissioned architect, Antoni Gaudi to redesign the house. The project was rife with legal and financial woes but Gaudi succeeded in realising his most iconic work of civic architecture with its completion. Unusual design elements include the façade that is a curtain wall, rather than the typical load-bearing wall and the ornate wrought-iron grilles on the balconies. The architect also bore the needs of modern living in mind and Casa Mila was the first residential building to contain a garage for coaches and cars. Every element has a distinct beauty, from the ventilation towers to the stairwells.

UNESCO declared Casa Mila a World Heritage Site in 1984 and this masterpiece is a testament to the sheer genius of Gaudi. Join the Northern Spain tour to see Casa Mila as well as Gaudi’s other masterpiece, Casa Battló.

The Cube Houses, Rotterdam, The Netherlands 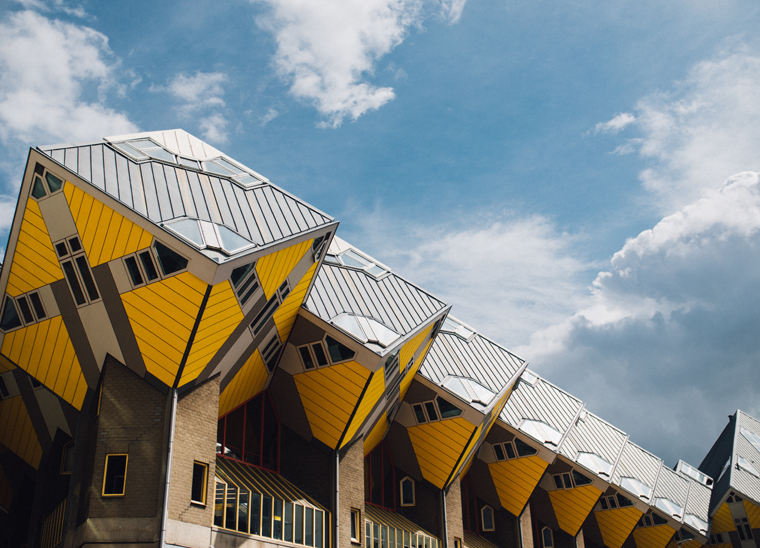 On Day 8 of the Country Roads of Belgium, Luxembourg and the Netherlands, guests will reach the largest port in Europe, Rotterdam. The city isn’t just known for its maritime history – it has become a flourishing modern center with radical design. One of the iconic developments that truly represents this reputation is the Cube Houses, which can be found directly above the Blaak metro station.

Designed by architect Piet Boom and built in 1977, these striking yellow homes are each interlinked and tilt at a 55-degree angle. He was invited to submit a design that allowed houses to be built above a pedestrian bridge. Boom said he wanted it to look like a forest of houses, where each house is a tree. Most of the houses are inhabited, although one is a now a hostel and another has been converted into a museum so that interested tourists can understand what it feels like inside the cubes. Each house is slightly different inside, but all have three storeys comprising a total of 100 square meters. It’s certainly an innovative option for urban housing, but one wonders how practical it is.

Every city in Europe has its own architectural attractions so if you’re a fan of unusual buildings, you could also check out the Waldspirale in Darmstadt, Four Solaire in Odeillo and the Guggenheim Museum in Bilbao. Insight Vacations also offer Custom Group guided tours, so we can tailor a guided tour based around your interest, whether it’s unique architecture and design or something else entirely. You get the benefit of over one hundred years of travel expertise, our extensive network, and a passionate Travel Director to accompany you throughout ensuring that you have a thoroughly enjoyable, stress-free holiday.

Insight Vacations
March 29, 2021
Previous
Connecting with the Women Who MAKE TRAVEL MATTER®
Next
Meet the Women Shaping the Future of Travel