Christmas in St Petersburg evokes images of steaming banyas, frozen canals and chinking glasses of chilled vodka. Only 500 miles from the Arctic Circle, catching sight of the city’s snow-dusted onion domes accompanied by the peal of church bells, is a once-in-a-lifetime experience. If that’s not enough reason to go, then here are our 10 favorite reasons to spend Christmas in St Petersburg.

It’s useful to know that most Russians follow the Julian Calendar, which means that they celebrate Christmas in early January, rather than 25th December. Christmas here is a profoundly religious festival, but there’s also a keen focus on food. No one at a traditional Russian Christmas table is in danger of going hungry. The spread typically includes a staggering array of dishes, from stuffed pig’s head to roast goose with apples, pies and pirogi, and desserts of cakes, fruits, biscuits, and candy.

Don’t miss one of the city’s Christmas markets. Our favorites are the ones on Moskovskaya Square, Pionerskaya Square, as well as Gatchina Palace, where four generations of the Romanov family lived. Visitors should expect impromptu concerts and grottoes, alongside gingerbread, toys and fairground rides. 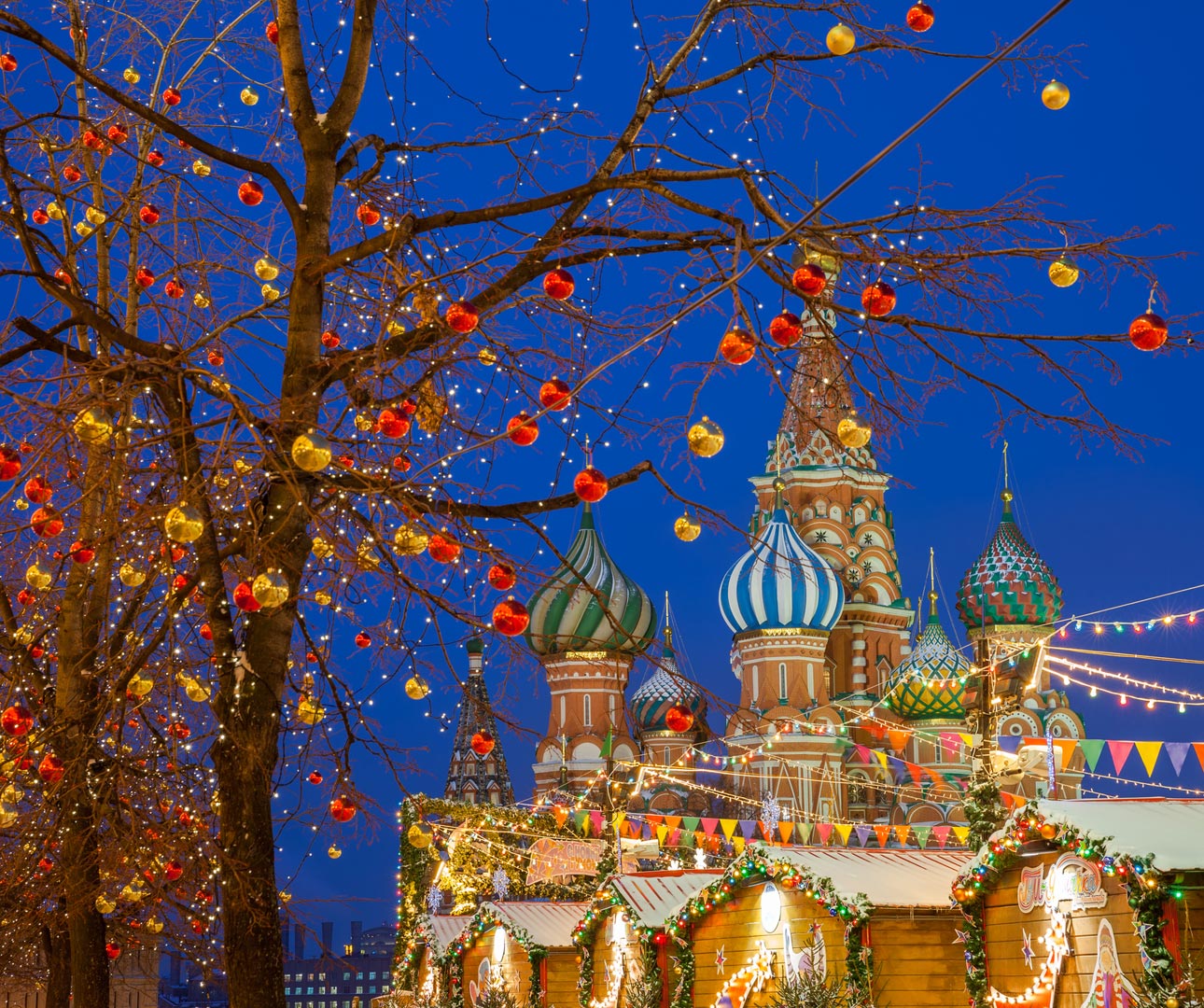 St Isaac’s is the largest Orthodox cathedral in the world and, with its sculpted pediments, rich marbles and colorful mosaics, also one of the most beautiful. It is a must see at any time of the year but it takes on something of a magical quality when covered by a thick blanket of snow.

Nevsky Prospect, sometimes known as St Petersburg’s “Regent Street”, was once St Petersburg’s main route to Novgorod. Now home to some of the city’s best shops, restaurants and architecture, it’s a great place to pick up some Christmas gifts whilst a visit to Arts Square and the Russian Museum is a must. 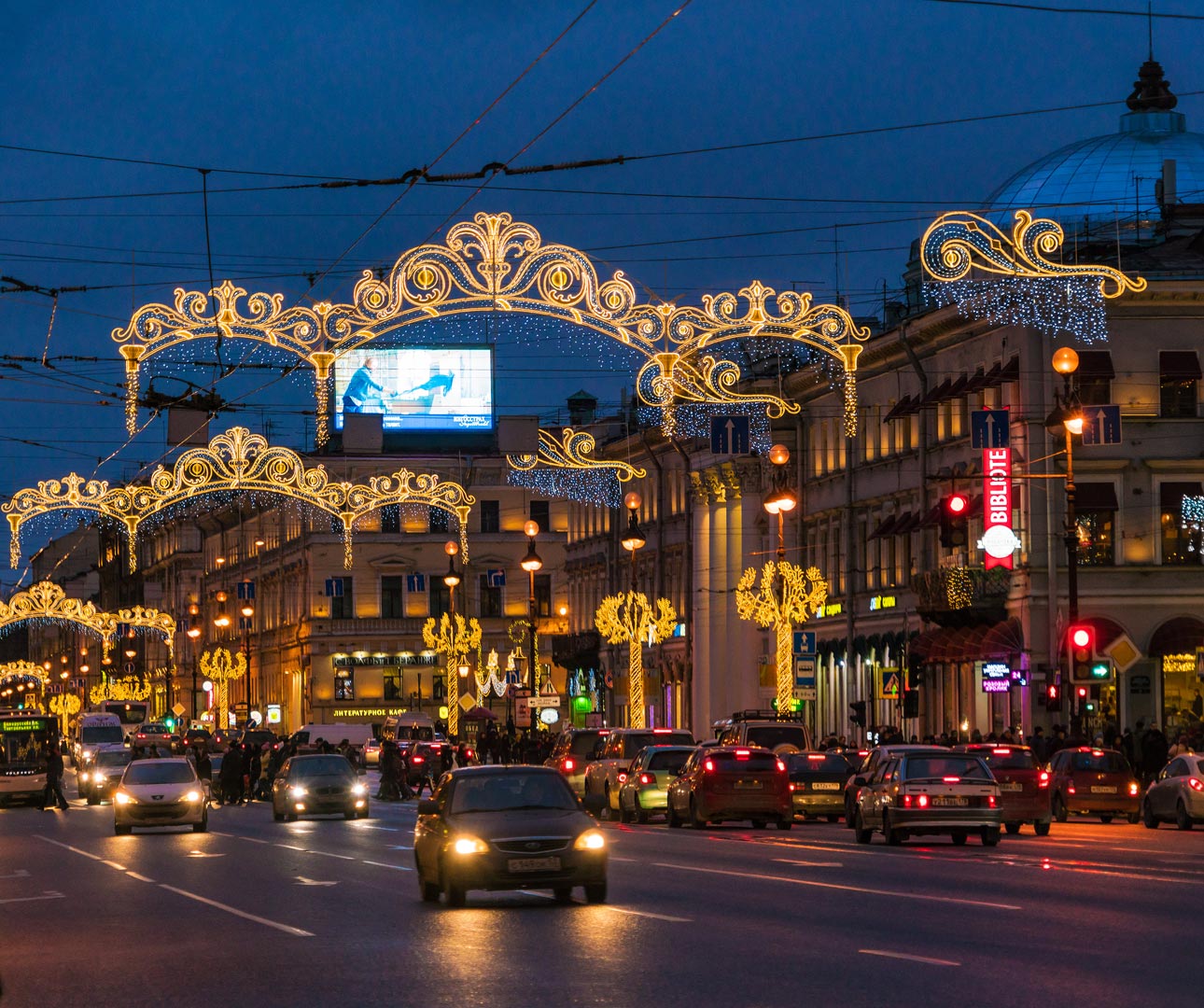 Ice-skating is a favored Christmas past-time in St Petersburg. Head to New Holland, St Petersburg’s hip new regenerated arts district (think New York’s Highline) or Krestovsky Island for some of the best. The latter is especially loved by families for its nearby reindeer farm, which allows the feeding and petting of the animals.

The festivities of the annual International Winter Festival, where St Petersburg showcases an array of culture drawn from around the world and the regions of Russia. Every year the organizers pick up on a particular anniversary or event with previous years having celebrated Shakespeare, Tchaikovsky and Sibelius.

Named after Catherine I, the wife of Peter the Great, the 18th century Catherine Palace is renowned for being even more extravagant than Versailles. Almost a kilometer in circumference and decorated with over 100 kilograms of gold, it is nothing short of opulent. Head for the Amber Room, a spectacular chamber decorated with amber panels, gold leaf and mirrors.

Few things can encourage festive spirits than a night at the ballet. St Petersburg’s Mariinsky Theatre has a reputation for producing the finest ballet and opera productions. In the late 19th century, it was hosted premieres of new works by eminent figures, including Tchaikovsky’s The Nutcracker. In December, the Mariinsky always perform one of Tchaikovsky’s Christmas masterpieces, such as The Nutcracker or Swan Lake.

The city’s Hermitage Museum is wonderful at all times of the year, but when the snow is on the ground the extravagant façade glistens in the cold light. Inside you can keep warm, mesmerized by its extraordinary collection of art, before dashing out to the lovely Bruegel-esque winter scene outside.

Transport yourself back in time to feel like the heroine of a classic Russian novel with a troika ride around Pavlosk Park. Marvel at the neoclassical splendor of Pavlovsk Palace as you glide through the snow-covered landscape in a traditional Russian carriage, drawn by three horses.

So are you feeling festive and tempted to spend your next winter holiday this magical wonderland? Then now is the time to book a winter departure on our Easy Pace Russia premium guided tour, and travel to Russia in style!

Insight Vacations
December 20, 2021
Previous
8 tips for particular eaters when traveling
Next
2022 Bucketlist – Ulla Hefel Böhler’s TTC Top 3
You might also like
One of the following
May 17, 2022