Vacations should be full of color, providing you with vibrant pictures in your mind to last for years. When one thinks of city trips, we tend to imagine old and gray buildings, but some are full of quirky laneways and rows of brightly painted houses. There are many great destinations around the world that offer culture, fun and adventure, but we’ve chosen a selection that also provide a beautiful backdrop. The most important thing to pack for these destinations is your camera! Read on to discover more about our exclusive tours that offer you incredible experiences in the most colorful cities in the world. 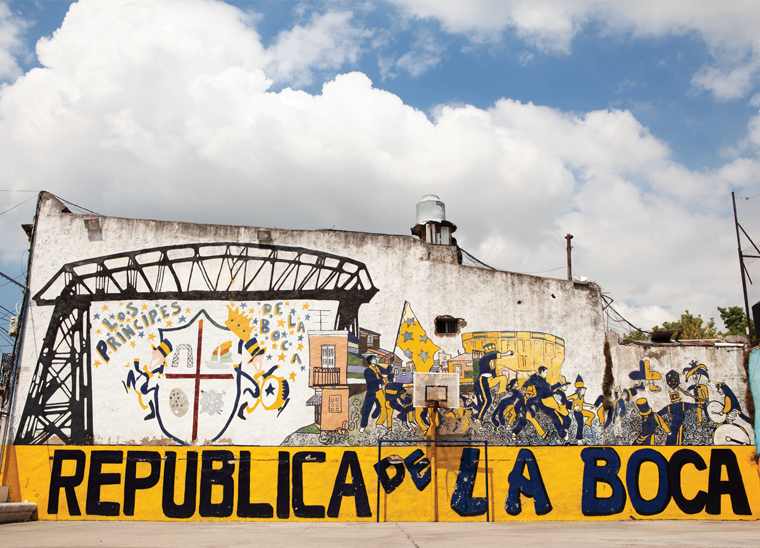 The capital of Argentina has earned the nickname, the “Paris of South America” for its glamor and sophistication. However, it has a personality that is distinctly its own, which travelers can discover on the Argentina, Uruguay and Brazil Discovery tour with Insight Vacations.

On Day Two of your trip, you’ll visit La Boca, the most colorful barrio (neighborhood) in the city. Each building is painted in a different color so it truly stands out. Wander down El Caminito to soak up the arty vibe, seeing street art open air museum. Music seems to be on every corner, and you’ll witness a private tango performance in a traditional conventillo.

Later, stop by the lively San Telmo barrio, the oldest neighborhood in the city. Walk amid the stalls of Mercado San Telmo, established in 1897, where you can buy fresh fruit, spices, vintage clothes and antiques. The neighborhood is characterized by pretty pastel buildings that date back to colonial times.

If you spend more time in Buenos Aires, Recoleta is another district worth spending time in. It has a fine selection of galleries and museums to keep art aficionados interested, and is home to the incredible cemetery where the former First Lady, Eva Peron, is buried. 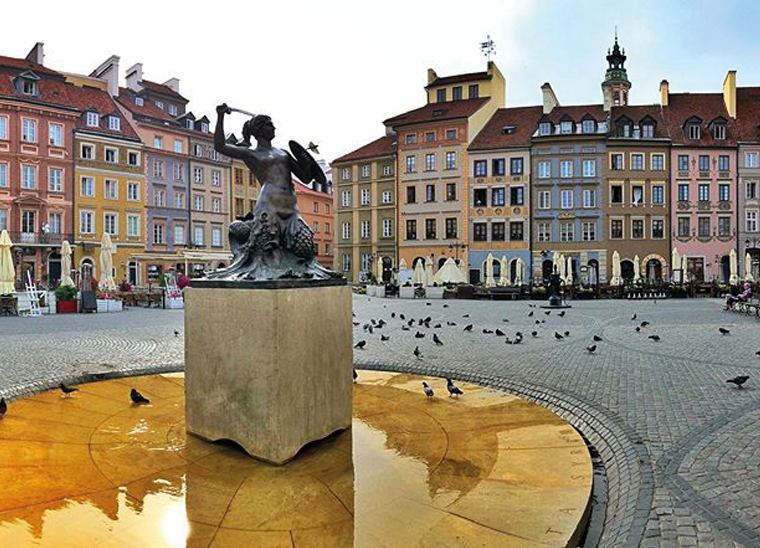 The Polish capital is a celebration of history through architecture. From the magnificent baroque façade of Wilanów Palace, the former royal seat to the post-modern wonder that is the University of Warsaw library.

Travelers on the Insight Vacations’ Highlights of Poland tour reach Warsaw on Day Eight of their guided vacation. A Local Expert shows you the towering Palace of Culture and Science, influenced by American art deco style, while guests can also admire the post-war houses that sprung back up along the market place, leading to its recognition as a UNESCO World Heritage Site. The colorful buildings reflect the history and tenacity of this fascinating capital.

The New Town Market Place is also full of color, with contrasts between the proud red roofed buildings and the green dome of the Church of St. Casimir. The Barbican is a beautiful construction, originally built in 1540 and reconstructed after its destruction in the World War II. The pink hued stone was retrieved from other war-torn buildings around Poland

For even more bursts of color, visit the Botanical Gardens in the city, with blooming examples all year round. 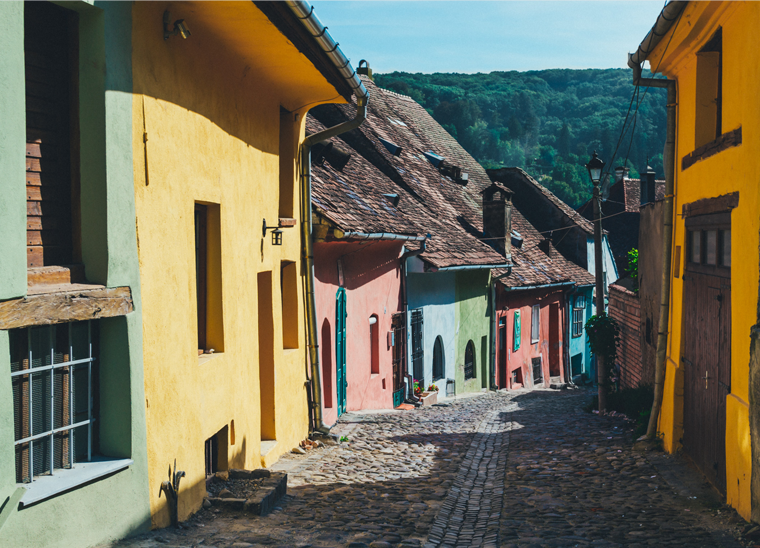 Staying with lesser visited city in Europe, Sighisoara is another picturesque place offering many photo opportunities. If you’re joining the Treasures of the Balkans tour, you could add a day or two on to your vacation to explore the birthplace of Vlad the Impaler, otherwise known as Dracula.

The city was declared a UNESCO World Heritage Site in 1999 and practically every third building is listed as protected. Not only that, it’s very easy on the eye. Every second building is painted in bright colors, which brings a feeling of joy to the city, even in the dark winter.

Wander the attractive cobbled streets to see the various hues from peach to green and yellow, and admire the unusual Clock Tower that dates back to the early 14th century. It’s impossible to get lost here, as the streets will always lead you back to the two main squares. Grab a coffee, order some polenta with cheese and see the brightly colored bicycles that have been repurposed as flower planters.

It’s possible to get a bird’s eye view of the city if you follow the mysterious wooden tunnel to the Gothic style church on the hill. It’s a fantastic place to snap a photo of this cute historic city. 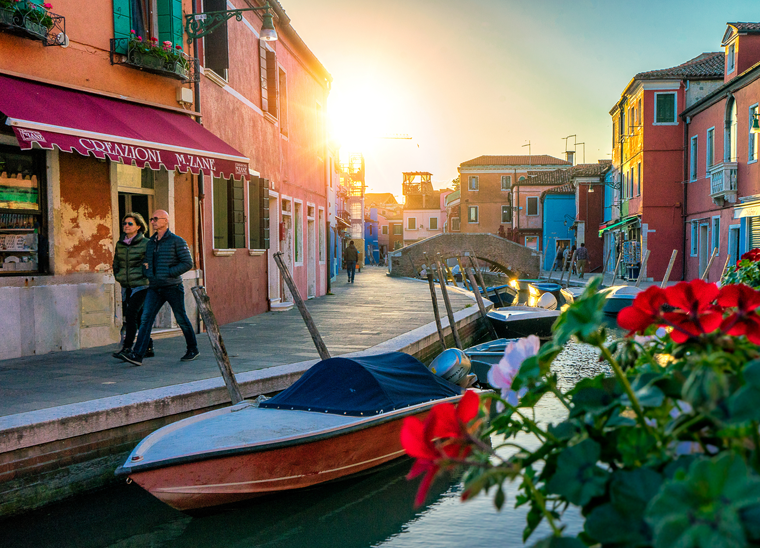 As one of the world’s most visited cities, Venice is known for many things, probably least of all its palette. However, there’s no doubt that its appeal is helped by the Mediterranean hues that are spread across the city.

The most striking of the islands that make up Venice is Burano, known for the intricate embroidery that originates here. Each house has a different stitch, even though the women all sit together making each piece. This tradition has lasted centuries in the community and delicate items can be found for sale in little boutiques around the neighborhood.

All along the canal stand houses in every shade of the rainbow and there’s a good reason for their distinction. Burano has been a fishing community for a long time, however in winter, it is often shrouded in mist from the canals, making visibility an issue. Fishermen began to paint their houses in different colors so they could recognise one from the other after a long day’s work.

Insight Vacations’ Easy Pace Italy reaches Venice on Day 7 of the tour and guests have the option to visit Burano. Alternatively, the women-only tour Venice & the Croatian Coast begins in the city, so female travelers can consider that itinerary. 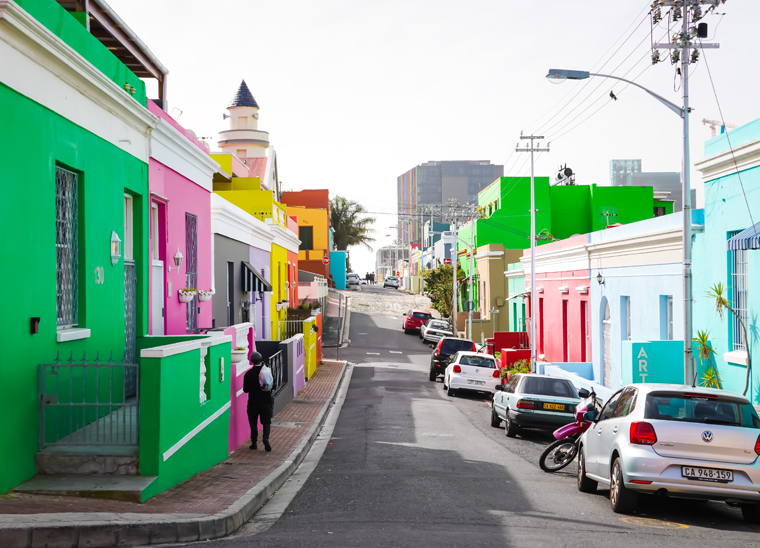 The view of the magnificent Table Mountain in lush green against the azure blend of the Atlantic and Indian oceans makes most people agree that Cape Town is one of the most beautiful cities on Earth. However, it’s not just the nature that is bright here – there is plenty of other color throughout the city.

Most prominent is the Bo Kaap neighborhood, which rises to the north of the city on Signal Hill. Formerly known as the Malay Quarter, due to the fact that many of the inhabitants here came from Malaysia and Indonesia. The Dutch East India Company housed slaves here for hundreds of years in whitewashed houses that completely contrast with their appearance today.

When Nelson Mandela became president, slaves gained the right to buy their houses and they declared their freedom by painting the homes in bold, bright colors. Visitors can learn more about the history and culture of the neighborhood at the Bo Kaap Museum, an elegant building with a curvilinear Baroque parapet, that dates back to the mid-18th century.

Travelers can explore Cape Town with our sister company, Luxury Gold, on the Spectacular South Africa, which allows five days to explore the many wonders of this city. 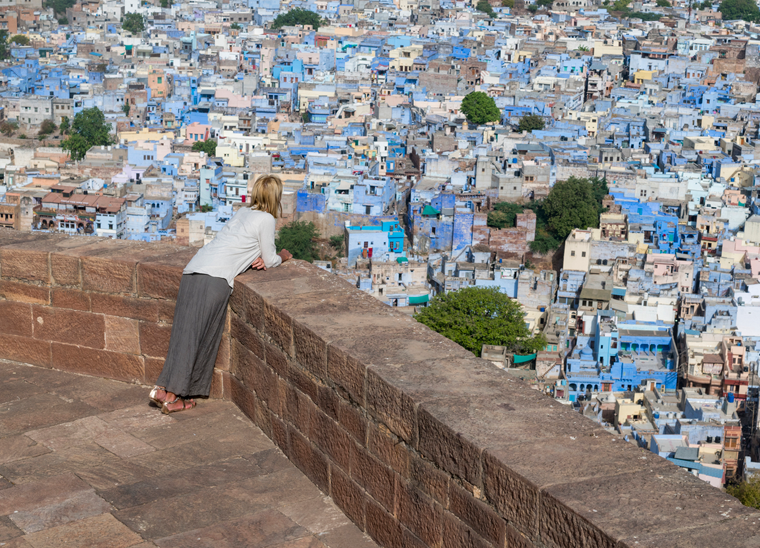 The Inspirational India women-only tour brings guests to the arid desert of north Rajasthan where the city of Jodhpur glimmers in blue. No one can say exactly why so many of the buildings are all painted blue here, but it’s believed to be derived from the Brahmin community, who traditionally painted their houses in the shade. Others say it’s simply to ward off termites.

A walk through the streets reveals even more color, from the brightly-dressed women and children to the rich yellows and orange of the local specialty dishes. Everything is rich in hue here, all highlighted against the dry, desert landscape where the sun gives little respite.

The best views can be gained from the Mehrangargh fort, presiding over the city on a large cliff. Although it is not blue, it is still an impressive fortress which houses a treasure of artefacts from times gone by. Admire the white marbled museum of Jaswant Thada and its intricate detail. 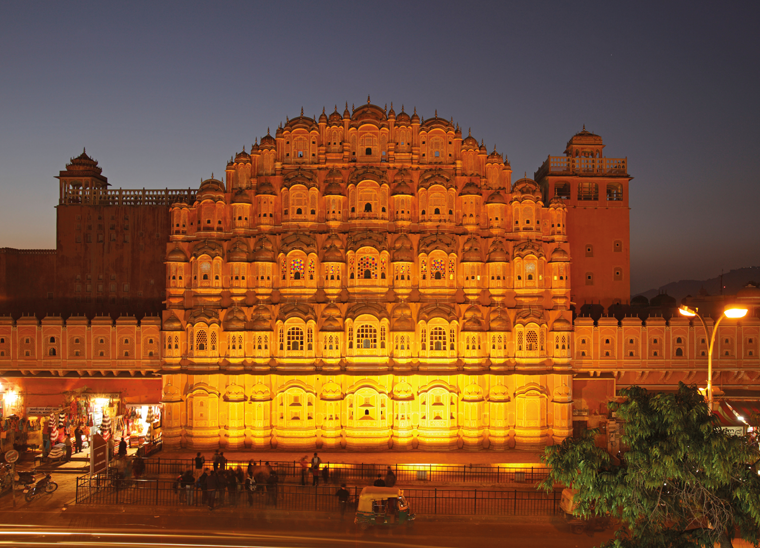 From the Blue City to the Pink City of Jaipur, where travelers can see the stunning Hawa Mahal palace, constructed with red and pink sandstone. The Palace of the Winds, as it is known, has a staggering 953 windows with ornate latticework, designed in such a way that females of the royal family could witness festivals without being seen.

Every building in the historic center of Jaipur is painted this terracotta pink color, to adhere to a law passed by Maharaja Sawai Ram Singh in 1887. It is traditionally associated with hospitality and a friendly welcome, and the maharaja had buildings constructed in this color to impress Prince Albert of the United Kingdom, who was in India on royal duties for 17 weeks in 1876.

Women on the Inspirational India tour spend three nights in Jaipur. As well as seeing colorful crafts such as tie-dyeing and bangle-making during your stay, you also join the ladies of the Pink Rickshaw Company for a Make Travel Matter experience. Hear more about how these women from low-income communities have been empowered to run their own business bringing tourists around the Pink City.

Art lovers will relish the opportunity to see the fabulous collection of Rajasthani and Mughal work on display at the City Palace. 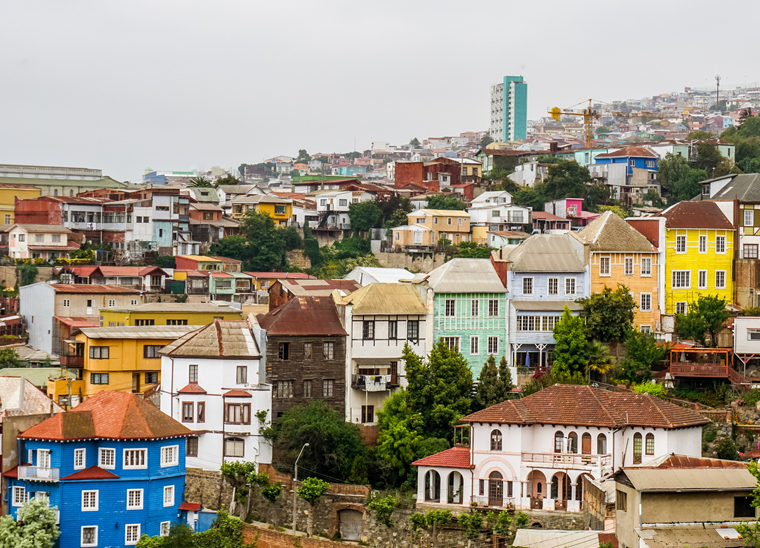 This coastal port city is like a living museum of street art, with street artists expressing their creativity on the winding streets and alleys. Every corner has an artist at work; the streets are alive with color and movement and it’s wonderful to simply sit at a quirky café to soak up the vibe.

Houses in vivid color tumble down towards the Pacific Ocean, which rolls in deep blue to the shore.  Valparaiso is a joy to wander around and just take in the view. Over 1,400 giant murals reflect local culture and creativity. Check out artists such as Charquipunk, Teo and Inti Castro, whose work has received international acclaim.

The architecture is also an amalgamation of styles, as a result of many European settlers making their mark in the 18th and 19th centuries. Check out the nautical blue of the Intendencia and the eclectic Barburizza Palace.

Explore this UNESCO World Heritage Site on the Best of Chile From Atacama to Patagonia with Insight Vacations.